“The Federal Government has struck a deal with the country’s 657 private hospitals, giving the Commonwealth access to another 34,000 hospital beds to tackle the coronavirus crisis.”

The deal also opens up access to private hospital staffing and equipment, such as ventilators.

One third of Australia’s intensive care capacity is in the private sector.

In exchange, the Commonwealth will guarantee the survival of private hospitals during the period while elective surgery, which is their main form of income, is cancelled.

“It will bring over 105,000 full and part-time hospital staff, including 57,000 of our amazing nurses and midwives,” Health Minister Greg Hunt said.

“It guarantees them their future … but most importantly it brings their resources to the fight against coronavirus, COVID-19, in Australia.”

Coronavirus update: Follow all the latest news in our daily wrap

Mr Hunt also confirmed the rate of infection in recent days was 9 per cent, down from between 25 to 30 per cent a week ago.

That drop came after the National Cabinet forced the closure of pubs, clubs, sporting and entertainment facilities and imposed restrictions on most gatherings.

“This progress is early, it’s significant, but now, with these additional rules around gatherings and movement, we are going the next step to help reduce again the level of infection, and to support our containment,” he said.

“All of that is then backed by our attempts and our plans and the reality of improving capacity.

Andrew TillettPolitical Correspondent
Mar 31, 2020 – 2.51pm
Save
Share
The Defence Department is persisting with exercises involving one of its biggest warships despite the cruise industry exposing how rampant coronavirus can spread on vessels at sea.

HMAS Adelaide was due to depart Sydney on Tuesday bound for north Queensland and will berth at Townsville in late April.

The ship is one of the navy’s two landing helicopter docks and carries a crew of about 360 personnel.

While the navy has suspended training exercises, deployments and other activities, it defended the decision to still send HMAS Adelaide to sea, saying it was undergoing “essential training”.

“All crew will be screened for COVID-19 symptoms before departure,” the Defence Department said.

The official figures for 24 countries across Europe show, not only that overall mortality is not increasing, but – so far – it is actually well below recent averages.

Get the latest information from the Australian Government Department of Health about COVID-19.

There’s only one Spaceship Earth

In my latest article for TomDispatch.com, I argue that the coronavirus crisis provides an opportunity to reimagine America.  Please read the entire article at TomDispatch; what follows is an extended excerpt.  Thanks!

This should be a time for a genuinely new approach, one fit for a world of rising disruption and disaster, one that would define a new, more democratic, less bellicose America. To that end, here are seven suggestions, focusing — since I’m a retired military officer — mainly on the U.S. military, a subject that continues to preoccupy me, especially since, at present, that military and the rest of the national security state swallow up roughly 60% of federal discretionary spending:

1. If ever there was a time to reduce our massive and wasteful military spending, this is it. There was never, for example, any sense in investing up to…

Under the consistent (sic) hand of helmsman Trump, official estimates for the death toll in the USA are ranging up to 200,000. More worrying from the perspective of profits, talk is now centring on the probability of a six month lockdown. If the economy of the USA collapses while China’s recovers, then the US’s global economic hegemony will be at an end. What would have taken years, has been achieved in months.

Shelter in Place: The Feminist and Queer Insecurities of ‘Home’

“. . . . even in a global pandemic home can be the least secure place of all, through the forms of structural and physical violence that manifest within.”

Frontline staff in some dialysis units and aged care facilities are reporting significant difficulties accessing personal protective equipment, while a cancer treatment centre was forced to produce its own hand sanitiser from donated ingredients after 200 litres “strangely went missing”.

Unprecedented demand for personal protective equipment (PPE) and hand sanitiser during the pandemic has caused shortages across the healthcare system, prompting warnings from Catholic Healthcare Australia, the Australian Nursing and Midwifery Federation, the Australian Medical Association and the Royal Australian College of General Practitioners.

It has also sought to boost supply by opening up the nation’s emergency medical stockpile and increasing domestic production, including through calls for Australian companies to pivot into the production of PPE, and sending in the army to help double the production of local manufacturer Med-Con.

Globally, the World Health Organisation has urged nations to boost their domestic PPE production by 40% and lift export restrictions that are interrupting usual supply.

But PPE shortages are continuing to be felt to varying degrees in hospitals and clinics, including in some services caring for extremely vulnerable patients.

Patrick Beissel, a registered nurse, said medical staff at his dialysis unit in Sydney’s north-west had faced critical shortages of masks. At some points, staff had been forced to either re-use the equipment or go without. 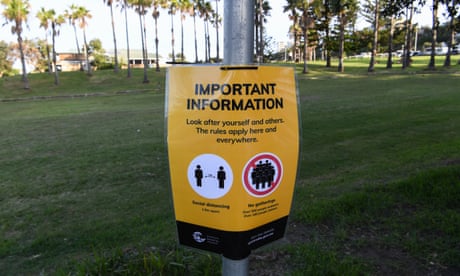 Dialysis units treat some of the healthcare system’s most vulnerable patients, who are at “higher risk of severe symptoms and complications from coronavirus”, according to Kidney Health Australia. The leading not-for-profit organisation has advised dialysis patients to continue receiving their treatment amid the Covid-19 pandemic and to contact their dialysis unit to do so as safely as possible. If patients are unwell, particularly with a fever, they are advised to phone their unit and act on the advice of nursing staff.

Beissel said his unit generally saw a maximum of about 32 patients a day across two shifts. They had, until recently, had only half a box of surgical masks to share between staff and patients.

Beissel said promises of more stock had not materialised and staff had resorted to scrounging for their own masks.

“Our situation is not unique, which makes it even more appalling,” he told the Guardian. “No one as far as I know is wearing a mask full-time. We are also running out of hand sanitiser, aprons and antiseptic wipes, with uncertainty about when or how we will get more.”

Beissel said staff at the unit received new surgical masks last week, but not the N95 or the P2 masks recommended by the federal government and NSW Health in certain higher-risk circumstances.

The unit is run by Fresenius Medical Care, a multinational giant, and one of the biggest dialysis treatment providers in the country.

Fresenius denied any suggestion of PPE shortages in its dialysis units and said it was meeting the government’s guidelines on PPE use.

In response to the recent PPE shortages in aged care, the government has opened up a direct line to the federal health department for providers, through which they can request supplies from the national medical stockpile.

Requests are being triaged to prioritise PPE for providers who have had a confirmed case of Covid-19.

The Health Services Union’s national secretary, Gerard Hayes, said it was crucial that PPE was distributed in a preventative way, rather than simply waiting for a problem to emerge.

“Everybody is on the same page here,” Hayes said. “Don’t wait for the issue, you’ve got to prevent it. That’s the only way to resolve the matter in aged care. If they can open up those stockpiles now, and hopefully they have, that will at least stop issues developing.”

The Australian Healthcare and Hospitals Association’s chief executive, Alison Verhoeven, said there was currently a “high degree of prioritisation” of PPE to critical areas of the healthcare system.

The national pandemic plan set out a hierarchy of organisations that could distribute PPE, she said.

Hospital access to PPE from the national medical stockpile was requested by the state health departments. General practice and community pharmacy requests were being governed by primary health networks, with GPs given priority, particularly in areas with high rates of chronic disease.

Verhoeven told the Guardian that other health businesses, such as dentistry and physiotherapy, were much further down the priority list. “What the government has been doing has been prioritising that to areas which absolutely have to function and can’t function without PPE.

“Clearly that’s intensive care, and it is the management of vulnerable patients … dialysis patients, Aboriginal communities, some very vulnerable older people. Managing their care is actually quite tricky without PPE.”

The cancer treatment centre Chris O’Brien Lifehouse currently had adequate stocks of PPE but knew it had “greater challenges to face before this is over”, said its chief executive, Eileen Hannagan. The centre was left in a difficult position when 200 litres of its hand sanitiser “strangely went missing” earlier this month.

Hannagan said the losses were made up by donations of sanitiser ingredients from across Sydney and interstate, including from universities, gin distilleries, hairdressers and chemists. The centre was now using the donations to produce its own sanitiser.

“The challenge is looking after our staff and ensuring they feel safe and supported,” Hannagan said. “We’re balancing their understandable anxiety and fears against the responsible use of PPE for the protection of staff and patients and ensuring supply into the future. We know we have greater challenges to face before this is over.”