What it said about these two women from the Middle Ages I found very remarkable. This is just one of the many interesting things we could read about in the Jewish Museum. It made me reflect on people’s attitudes towards religion many centuries ago! Here now I do not want to hesitate to add this picture from the Jewish Museum . I’m glad I looked through the pictures in our files once more and found it. I remember I was very moved by it when I saw it for the first time. I still think it is an outstanding document about a time past. 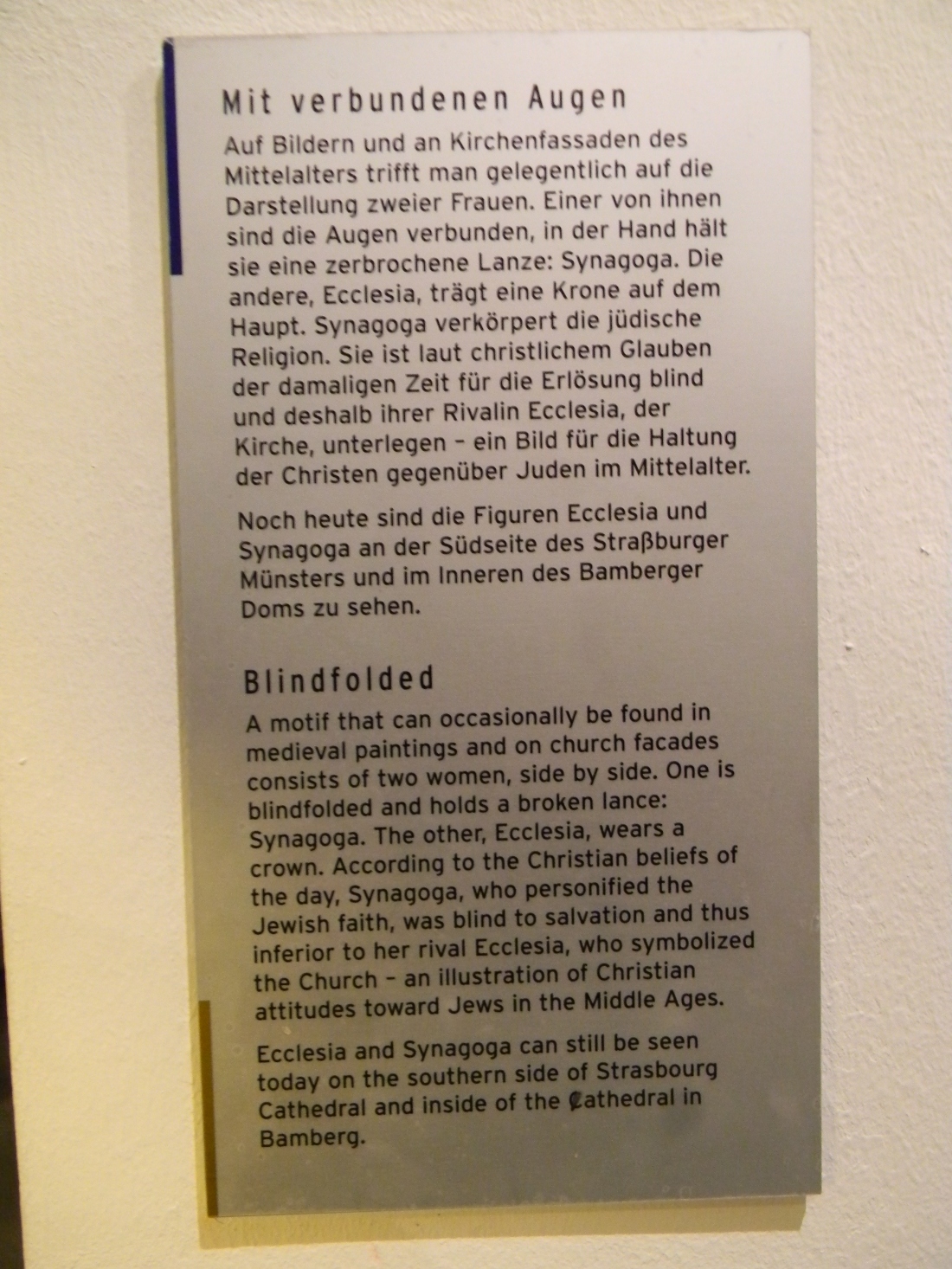 A few weeks after Yom Kippur Peter and I went again to the Jewish Museum together with Corinna, my niece. This time it was open, of course, being visited by a large number of people including school classes. Lots of young people, who worked there, (I think some on a working holiday from Israel), were extremely friendly and assisting whenever one needed help with something. We spent hours and hours looking at the various displays.

I was amazed about the extend of information at hand. It was an enormous eye opener of Jewish life in Europe over hundreds of years. I am glad the pictures that Peter took are still in our files and that I can publish them now. 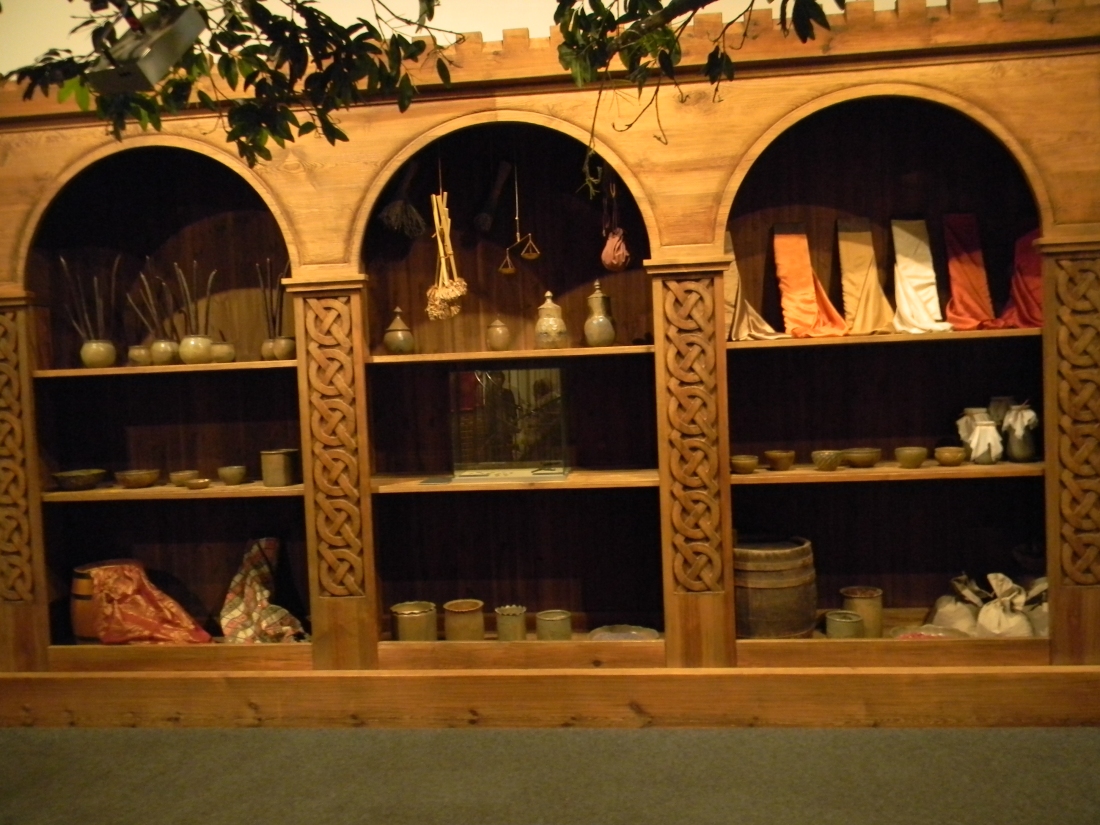 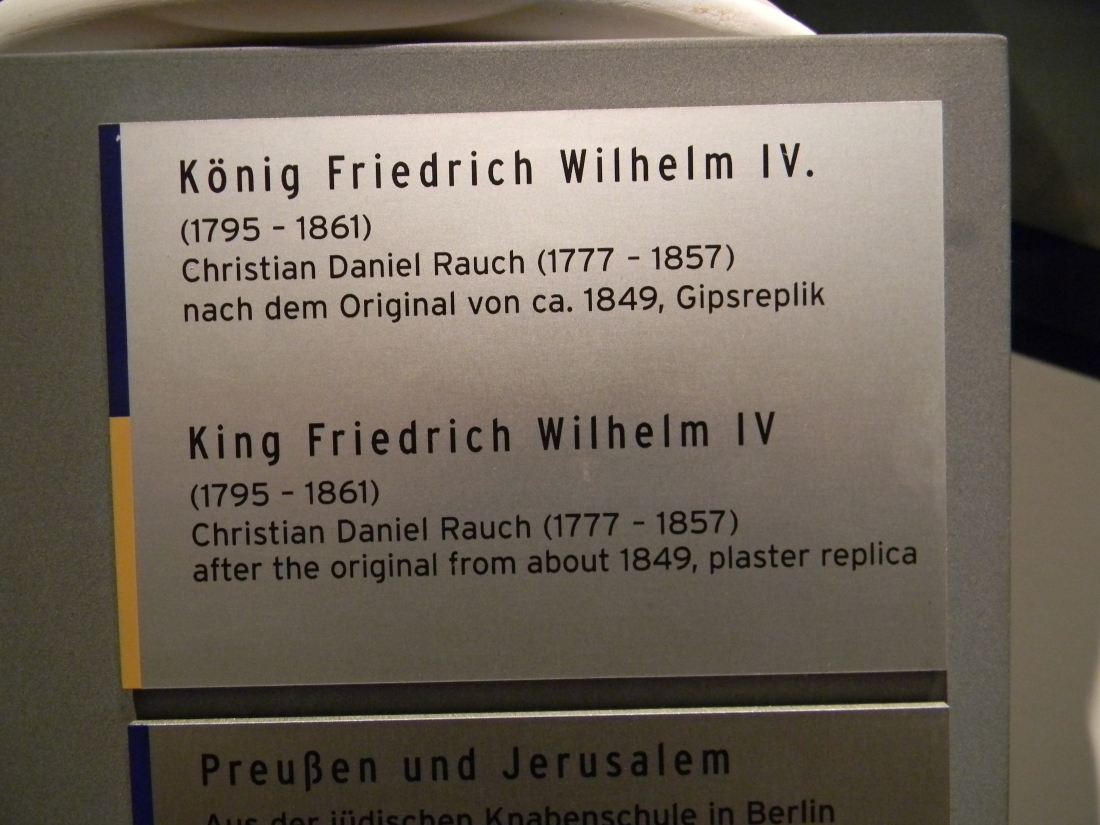 This is displayed near the Field of Stelae. It Says: Europe Foundation Memorial to the murdered Jews of Europe.

We only found out about Yom Kippur when we saw this sign at the entrance to the Jewish Museum which we had planned on visiting. We walked to the next Underground Station, got off at Potsdamer Platz, took pictures and then walked on to the Field of Stelae. 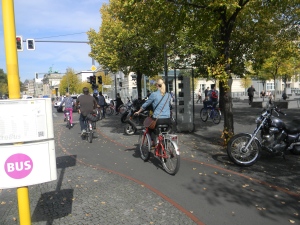 These are some of the Berlin Welcome Bears. On some of them you see Peter , on some others you see me.

These aren’t all the Berlin Bears, of course. There are hundreds of them with different motifs spread

all over the city. 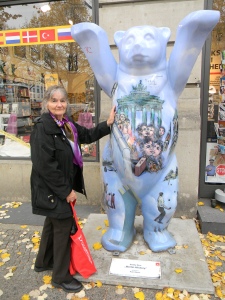 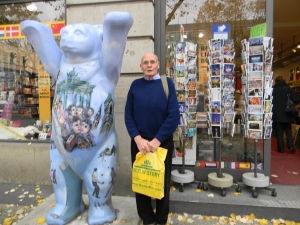 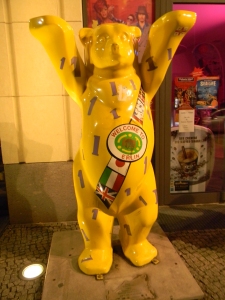 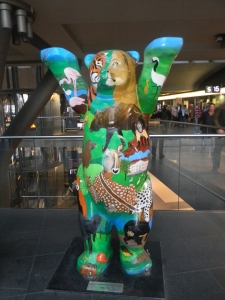 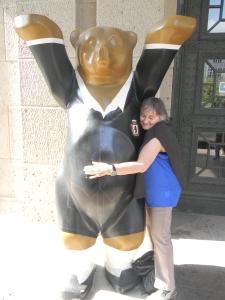 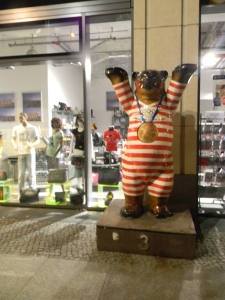 In a reply to one of Munira’s comments I mentioned that we had no washing machine in our unit in Berlin and that there was no laundromat near-by either. So I had to wash all my things by hand whereas Peter could give his shirts and trousers away, leaving them in a shop around the corner and picking them up again five days later. We assume the items were probably sent to Poland for washing and ironing because labour there is cheaper!

I forgot to mention to Munira that during the sixty days, that we were in the flat, a woman came in, but only twice to change our bed-linen and  supply us with fresh towels. We did our own cleaning of the place. Not exactly a five star service but then we didn’t have to pay for five star service either! We were quite happy with the arrangement. We were supposed to regard our place as a furnished rented flat and not a hotel. So we were really grateful that all the bedding and towels (including kitchen towels) were provided.

However,  to have to wash my things by hand did take a bit of time to get used to. There was only a small basin in the bathroom. Most of the time I had to use the bathtub to do my washing in.  I could use a plastic bucket to put in the bathtub. However, this meant I had to bend down quite a bit!  I kept thinking about it how in the old days, when people didn’t have washing machines yet, a lot of the washing was done by hand. For larger items boilers were used. The nappies used to be washed in boilers too. With three babies under three we used to boil up a lot of nappies!

Gradually I got used to the task at hand. Remembering the old days I was glad that at least I didn’t have to use boilers any more! The bathroom was always pleasantly warm and there was always hot water out of the tap. I could dry my washing on some clothes lines above the bathtub. These clothes lines could be pushed against the wall out of the way when they weren’t needed.

Come to think of it, there was one other thing that was a bit difficult for me, being not a young chicken any more. I’m speaking of taking a shower. Imagine the shower was above the bathtub! That means when I wanted to take a shower I had to stand in the bathtub. Climbing in and out of the bathtub was sometimes a bit difficult for my old bones. I just had to do it carefully and slowly. Once I was sitting in the bathtub and had difficulty getting out of it. So I called Peter and he gracefully helped me out!

After exactly sixty days our time was up at the apartment in Berlin. My brother came to pick us up and take us to his place in Mecklenburg-Vorpommern. The dwelling place he provided for us was somewhat different from the small place we had had in Berlin. Peter has a few pictures of it which I am going to show in one of my next posts.

We loved to go for walks in the Tiergarten early in the morning. Close by was the Siegessäule (Victory Column), which Peter loved to take pictures of. 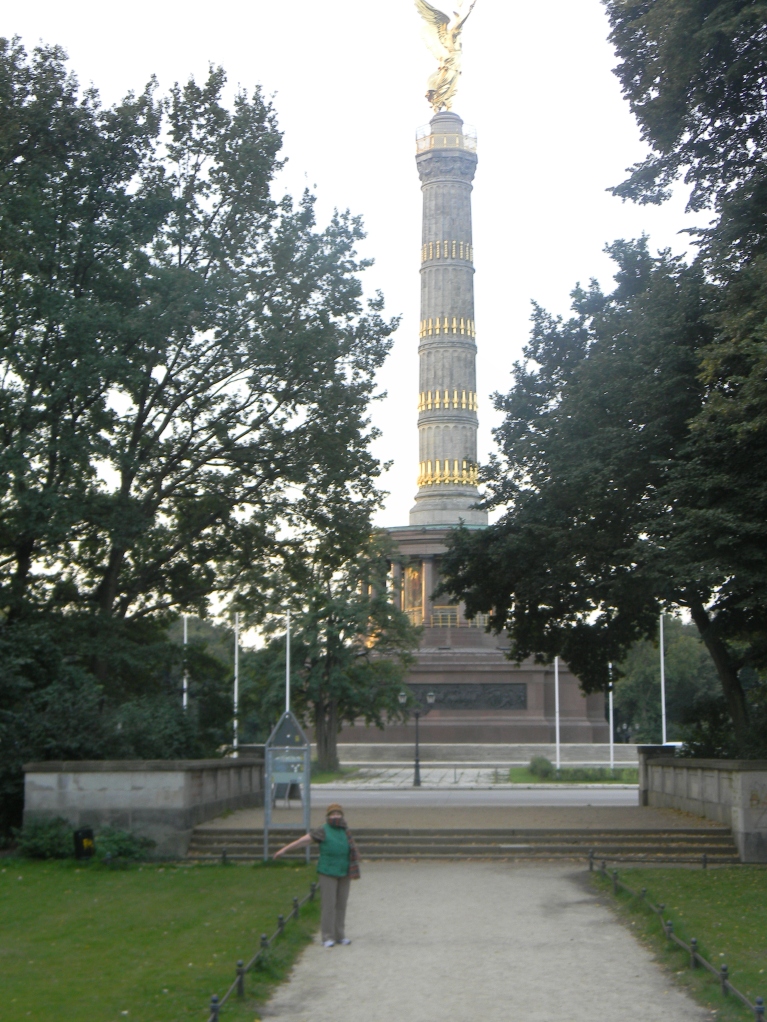 During the second week in Berlin Peter’s sister Ilse came to see us. We went for lunch to the close by Italian restaurant, where we sat outside on a beautiful mild, sunny day. We were all very happy with our meal. And it didn’t cost much! We were surprised we could get for so little money (5 Euros for a pizza!) such a big meal. 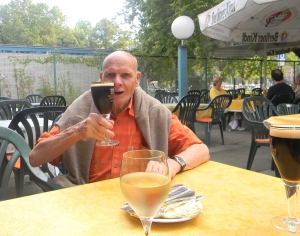 On Monday, 10th September 2012, the day after our arrival in Berlin, we went to visit Daniel and Sakorn who was celebrating her birthday with a lot of her Thai friends. Daniel is a son of Peter’s sister Ilse. We traveled by public transport together with Ilse to the beautiful private garden where the birthday party took place. Later on the other son of Ilse, arrived with Susanne to join the party. I went to sleep on a garden lounge Daniel kindly provided for me. He also gave me a nice warm blanket. I was still badly effected by jet leg!

Sakorn gave me boiled rice and freshly cooked vegies, wonderful vegies, for she knew I didn’t eat meat. She gave me also some excellently spiced sauce with my meal. And of course there was a selection of drinks available. They also offered Jägermeister, but I declined. I had the feeling that day that alcohol wouldn’t agree with me. Sakorn understood that I was still suffering from jet leg. She and Daniel fly just about every year for a visit to Thailand. We encouraged them to also come over to Australia next time they’re in Thailand. I think they might actually do this. That’s great. We love having visitors.

I’m coming now to Sunday, the 16th of September. On that day we were travelling by public transport to Borgsdorf visiting Ingrid and Erhard at their summer place. Ingrid is related to Peter’s family. Over the years we were always happy to visit Ingrid and Erhard whenever we happened to be in Berlin. On the phone Ingrid wanted to make sure we would come on Sunday. When I mentioned I still had a bit of a cold she said, not to worry, it was going to be a lovely, sunny day. I could just sit outside in the sun and this would do me good. I didn’t have to do anything. She was going to cook lunch for us, she said.

She did serve us a wonderful lunch. She loves to cook with healthy ingredients and lots of herbs and vegies from her garden. I really felt all right sitting in the autumn sun for hours and hours and being served a lovely meal and later on coffee and cakes. Before the coffee break we all went for a walk to the close by river. Borgsdorf is a very secluded little village. In people’s gardens we could see on their fruit trees hundreds of red apples. Sorry, no picture of the apples. 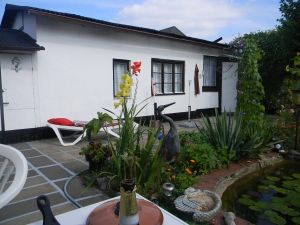 We soon found out that there was a great baker’s shop in the neighbourhood. Peter usually went down there early in the morning to get fresh bread rolls for breakfast plus a piece or maybe two pieces of cake! There was always a great selection of different cakes to choose from.

On Saturday (15th September 2012) Peter went down to get extra cakes for the guests we were expecting for afternoon coffee that day. When they pressed the bell Peter asked them to wait downstairs; he was to go down to guide them to the lift and show them the way to our apartment! I waited upstairs at the lift. Out came my nieces lovely family. There she was, my beautiful niece Corinna with Walter and son Carlos Emilio. Carlos had grown so much since I had seen him more than two years ago.

Even though I still suffered a bit from this nasty cold, we had a lovely afternoon together. 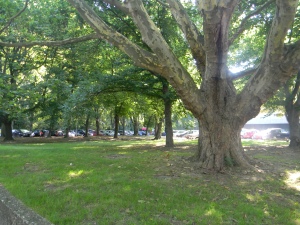 A modern street-car and lots and lots of bikes!

We had arrived in Berlin on Sunday, the 9th of September. After we had a couple of rather dark unpleasant days  a  bit of a cold started to hang around me. Luckily towards the end of the week the weather had improved. The skies cleared and there was plenty of sunshine! So we went on quite a few outings to explore the city or take some rest in the close- by Tiergarten park area.

It amazed us how many bikes there were to be seen all over the place. Still there were many, many cars as well.  The way some of the bike-riders went through the heavy traffic, often looked pretty scary to us. A lot of buses were often part of the street-scene as well. There seemed to be quite a bit of traffic too on the different water ways. And street repairs and new buildings going up where-ever we went in the midst of the city. Our first impression was, this is a buzzing city where always something was going on. But then there were the quiet areas in the parks in the midst of the city where the city seemed to be far away.

We later found out that Berlin has in just about every district a lot of park area. Only 60% of the available place is built upon, the rest is landscaped in some way. We believe this report because wherever we went to during our stay in Berlin there always seemed to be some beautiful looked after park for people to enjoy.  We also noticed a lot of memorials and sculptures. Of course we took quite a few pictures of a lot of them.  Since most of my pictures did get lost in cyberspace, I am now using for my posts mainly the pictures that Peter took.