RELATED STORY: India started filming not knowing how bad the firestorm would get. Now millions know her
RELATED STORY: Vets to spend days at ‘crime scene’ where at least 30 koalas were killed
RELATED STORY: Scientists call for end to political ‘smokescreen’ when it comes to climate change

Caroline and Matthew moved last weekend from a studio apartment to a two bedroom apartment next door. The removalist guys had to take everything down 30+ stairs and carry everything up next door some 53 stairs!
This is quite a lot of steps to carry every thing down and then up all these  stairs!

The rooster in the above picture remarkably made it to the balcony at the new place! Again, they do not have anything above where they live, so it is like a penthouse apartment!

1h 30min | Documentary, Drama, History | TV Movie 27 December 2009
Survivors’ testimonies, archive footage and re-enacted scenes are combined to describe the effects of one of the coldest and hardest winters in German history, only shortly after the end of WWII.

MY INTENTION: Must see the above documentary! I, Uta, and Peter as well, we can remember all too well this harsh winter!

Now to the downloading of more pictures. I was at a loss this morning to find my picture folder. As always, Peter had to come to the rescue again. So we sorted it out now.

I think I’ll insert some of the pictures into another post!

Updated about 3 hours ago

Desmond White leads a very modern life, riding his bike around inner-city Newcastle, where he lives on his own in a fifth-storey apartment overlooking the wharf.

But the 93-year-old was unimpressed when he recently became the owner of an iPhone.

“I had one of the old traditional phones, which was misbehaving. All callers — and I’ve got a lot of callers — would say ‘what’s up with your phone, what’s wrong with your phone?'” he said.

Optus offered Mr White a new phone and he agreed, but he was surprised to find it was an iPhone that arrived in the mail.

“I was expecting one like the old-fashioned stuff,” he said.

Suddenly, Mr White, who once presided over a successful tyre business, found himself unable to perform the previously simple task of making a phone call.

“Everybody promised — I’ve got grandkids and whatnot — to show me what to do with it,” he said.

With most of his family outside of the Newcastle area, Mr White turned to a computer club for older Novocastrians.

“I somehow managed to be able to make a call, and of course receive one … but it would be nice if I could do ever so much more, because I know it has so much to offer,” Mr White said.

“It is scary, a lot of them are fearful.”

Tutors at the club say where once people would come in curious to explore this new frontier, they are now coming in because they have no choice.

With Australia moving towards a cashless economy, many people have found themselves caught out, unable to use internet banking.

Ms Keen said the generational gap was particularly glaring when younger people tried to help out.

“They [older people] say, ‘oh I asked my son, or my daughter or my grandson or granddaughter … and they say, ‘oh you do this, this and this, press this button, do that, that’s how you do it’,” she said.

“The person sitting there who hasn’t understood the vast difference in the language and all the terminology, and hasn’t seen that before, is suddenly thrown and they’re thinking, ‘I have no idea what that person did’.

“They go to replicate it later and they have no idea.”

PHOTO: Many senior Australians seek help using the internet so they can keep up with their grandchildren. (ABC News: Elena de Bruijne)

Has technology made life better?

It has been more than a decade since Australians were introduced to smartphones, and the ABC’s Australia Talks survey found 96 per cent of people in the country now own one.

Not surprisingly though, the data shows the older you get, the less likely you are to have one.”

I, Uta, copied the above. This new technology I find very scary. I get the creeps when I am bombarded with terms like ‘the cashless society’! I am not 93 yet, I am ‘only’ 85. But I have very poor vision. The idea that in future I  may have to use an iPhone does scare me no end. My husband Peter is very close to my age. However, he knows how to use a smartphone and keeps in touch with the children and he also accesses all the information about the children that is available on Facebook. He spends many hours a day on these gadgets. I find it very helpful that he can always give me information about family and friends. So far it worked out all right that I have to rely on Peter for all this information. I think to have to spend hours and hours on these gadgets to eventually get some valuable information is not a very efficent way to get to the news that is important to me. I think I prefer to keep in touch via email or a ‘normal’ phone call if person to person contact is not possible. So far I have been lucky in that person to person contact has still been possible a lot of the time. And occasionally I still get some beautiful emails! And I like the World Wide Web and WordPress!

“Tutors at the club say where once people would come in curious to explore this new frontier, they are now coming in because they have no choice.”

So this is what the tutors say! NO JOICE? I hope this is not true for me. I just do not feel like going to that ‘new frontier’ and spending the last bit of time that may be left to me with torturing my brain with new things that I feel I should not have to learn at this stage of my life!! Please understand, I am willing to adapt as much as possible to new things that are necessary for instance to cope with climate change, but somehow I feel that new frontier technology I should not have to be confronted with . . . .

We usually do watch the Q&A program on our ABC. The program is shown on fairly late on Monday nights. Last night we were already too tired to watch it. So I looked it up this morning:

So far I looked only at the questions for last night’s program. These questions are rather interesting and I’d like to watch now what the all women’s panel answers were to all these questions! 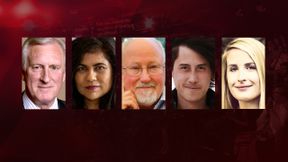 The end of the division (“Die Wende”)

So today, the 3rd of October 2018, Germans celebrate the Wiedervereinigung. It is a public holiday in Germany.

In the “Deutsche Welle”  was today an interview with Alexandra Hildebrandt who is the director of the Checkpoint Charlie Museum in Berlin:

This is what I found in Google about Hildebrandt’s pregnancies:

Berlin – At the age of 58, the museum director of the Berlin Wall Museum, Alexandra Hildebrandt, is expecting her seventh child.

As she confirms to the “Bild”, she looks forward to the seventh child as well as everyone else.

At the calculated date of birth – in January or February – the museum director will be 59 years old. For her, it is already the fifth child within five years. In 2013 she got twins, a daughter in 2014, a small son at the beginning of last year. In addition, Hildebrand has two grown children.

According to the head of the museum, the pregnancy came about in a natural way with her partner, the management consultant Daniel Dormann. Artificial insemination did not need it.

It’s in the family

As she goes on to say, there is a late happiness in the family. Already her grandmother had her last child at the age of 60 years.

For the 58-year-old is the re-pregnancy quite associated with problems. For two months she suffers from chronic bronchitis.”

And here another link:

The above link shows a bit more about Hildebrandt’s marriage to Daniel Dormann.

The following is from the updated Four Corners program:

“Australia is now one of the fattest nations on Earth.

Sixty per cent of us are overweight or obese, and by 2025 that figure will rise to 80 per cent.

Despite this, Australia still has no national obesity strategy.

What we do have are two key federal programs — the Healthy Food Partnership to encourage healthy eating, and the Health Star rating, a front-of-pack labelling system.

But the rules for these two initiatives have been set by committees made up of government and public health advocates, as well as food industry representatives.

According to one insider who spoke to Four Corners, “the reality is that industry is … making most of the policy”, and public health advocates are only included “so we can have the least-worst solution”.

Companies like Coca-Cola, Pepsico, Unilever, Nestle and Kelloggs have a seat at the table setting the policies that shape consumption of their own sugar-laced products.

As Australia’s obesity and diabetes rates continue to soar, public health advocates have told Four Corners the industry has been obstructing and delaying policy outcomes that would lead to better health.

And they have likened their tactics to those deployed by the tobacco industry . . . . ”

To read on please go to:

And here is a warning sign about not feeding kangaroos in a wild life sanctuary. People should really be taking notice of this:

Here in this article it says how bad it is for kangaroos to feed them processed food:

And even feeding them carrots in huge amounts can lead to addiction and very bad behaviour by kangaroos where they become very aggressive.