Peter enjoys a walk round the property. 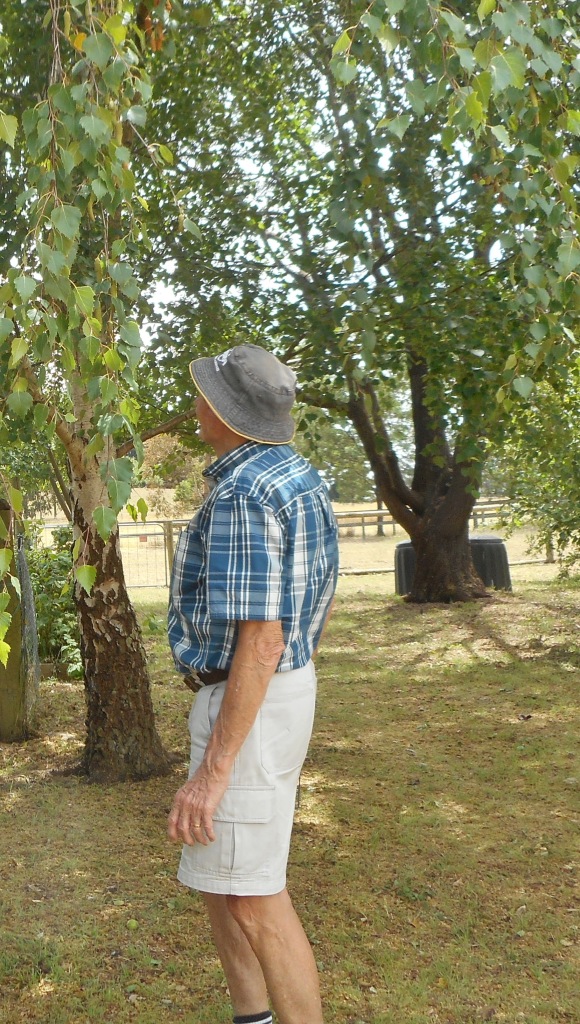 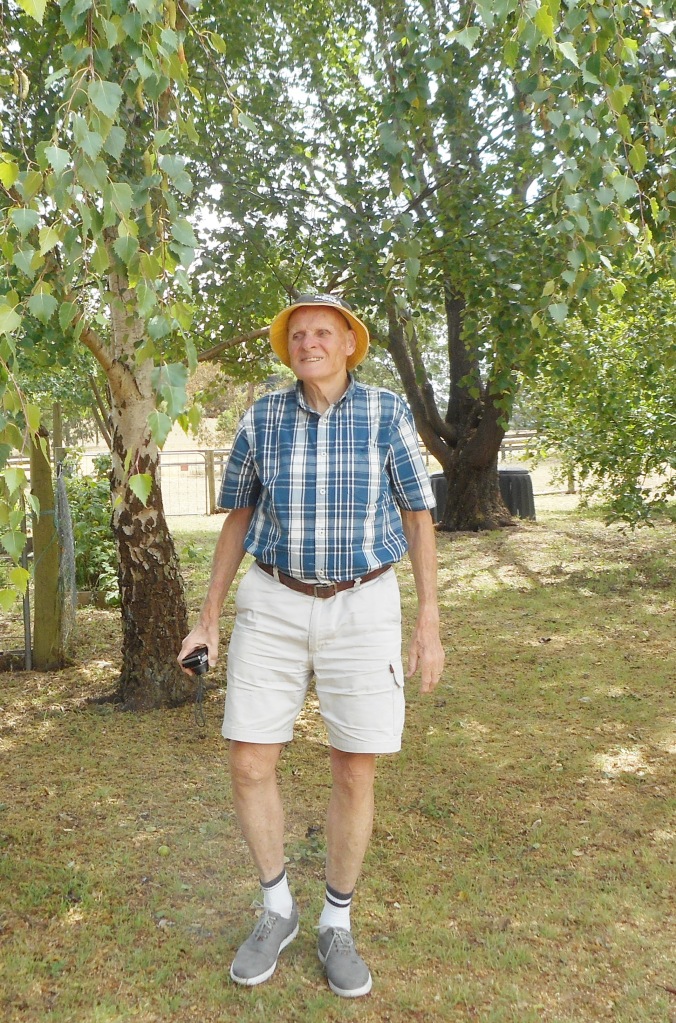 Yesterday morning Peter and Martin went on a fast walk along the Maribyrnong River. I stayed behind in a beautiful park area near the river and took some pictures. It was still early morning, but a lot of walkers and runners were already on their way. I had my toe-shoes on and walked mainly on the grass. 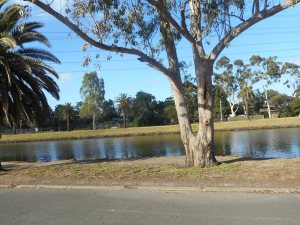 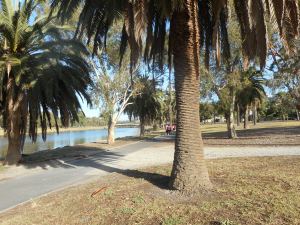 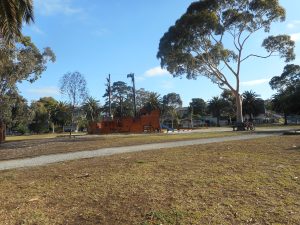 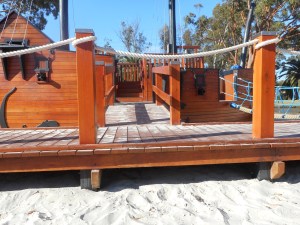 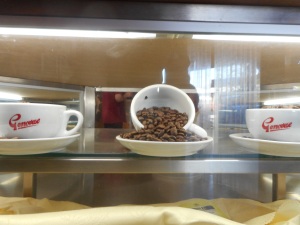 On Monday, the 28th of December, we left Dapto with Martin to drive to Melbourne. We stopped at Yackandandah, where we had lunch in a cafe. I had a vegetarian pastie and enjoyed it very much. 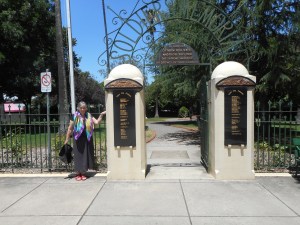 Yackandandah /ˈjækəndændə/ is a small tourist town in northeast Victoria, Australia. It is near the regional cities of Wodonga and Albury, and is close to the tourist town of Beechworth. At the 2006 census, Yackandandah had a population of 663.

Here is a bit more from Wikipedia:

“It is a former gold mining centre known for its alluvial wet mining techniques. Yackandandah Post Office opened on 13 June 1856. Another office nearby, Yackandandah Junction, opened in 1872 but closed in 1885.[2]

The area is now predominantly a dairy farming and forestry region, and has numerous bed and breakfast lodges which allow its many visitors to enjoy the peace and tranquillity of the district’s forest and mountains.

The town is affectionately known as “Yack”, though in more recent times it has increasingly been referred to as “the ‘dandah” by its younger residents.

The commercial centre of the town, known as the Yackandandah Conservation Area, is recorded on the Register of the National Estate.

The town has an Australian rules football team competing in the Tallangatta & District Football League. 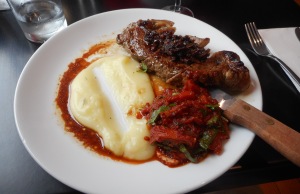 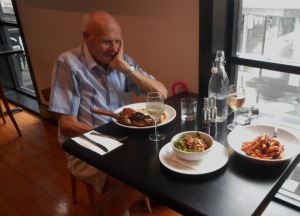 We had caught the bus to go to Wollongong. Luckily we had taken an umbrella along for it rained all day non-stop. Peter had an appointment at the Hearing Clinic. Before the appointment we had time for a cup of coffee: 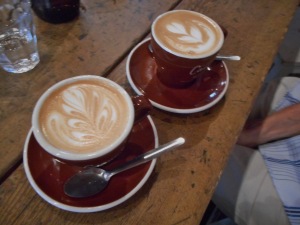 Two weeks ago Peter had had another appointment at the Hearing Clinic in Wollongong. On that day I took a few pictures in the Mall that I did not publish yet. School-classes had been colouring in posters of a Christmas Tree. These posters were exhibited in the Mall. 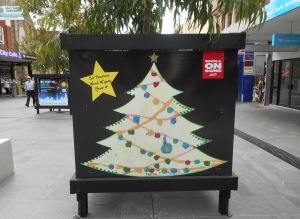 I keep a close watch on this heart of mine

I keep my eyes wide open all the time

I keep the ends out for the tie that binds

I find it very, very easy to be true

I find myself alone when each day is through

Yes, I’ll admit that I’m a fool for you

As sure as night is dark and day is light

I keep you on my mind both day and night

You’ve got a way to keep me on your side

You give me cause for love that I can’t hide

Because you’re mine, I walk the line

I keep a close watch on this heart of mine

I keep my eyes wide open all the time

I keep the ends out for the tie that binds

Because you’re mine, I walk the line

Yesterday, When the temperature in Dapto reached close to 35 Degrees (Celsius) Peter suggested we could escape to Kiama for some ice-cream. Well, in Kiama they catch fish, don’t they? And at Kiama Harbour is a fish-cafe where one ought to be able to get fantastically fresh fish. We set off before lunch to try our luck for getting some yummy, fresh fish.

The climate in Kiama was much to our liking. Our car told us, the outside temperature was ‘only’ 30 Degrees. When we got out of the car, there was a lovely sea-breeze. This was just perfect weather for a summer holiday. Lots of tourists and visitors were around in Kiama. When we cued up at the fish-cafe we noticed quite a few Asian tourists. Peter says, they did not hesitate to spend 70 Dollars on a basket of fish and chips! But you could of course also get smaller portions. Ours was only thirteen Dollars. 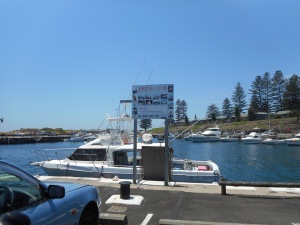 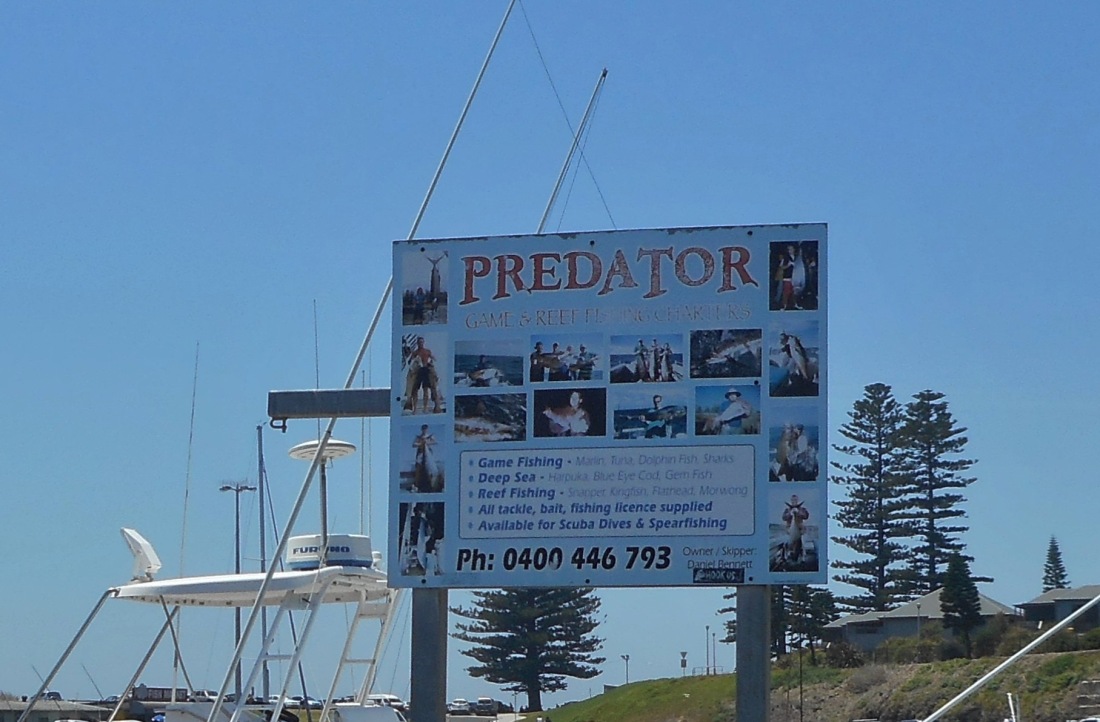 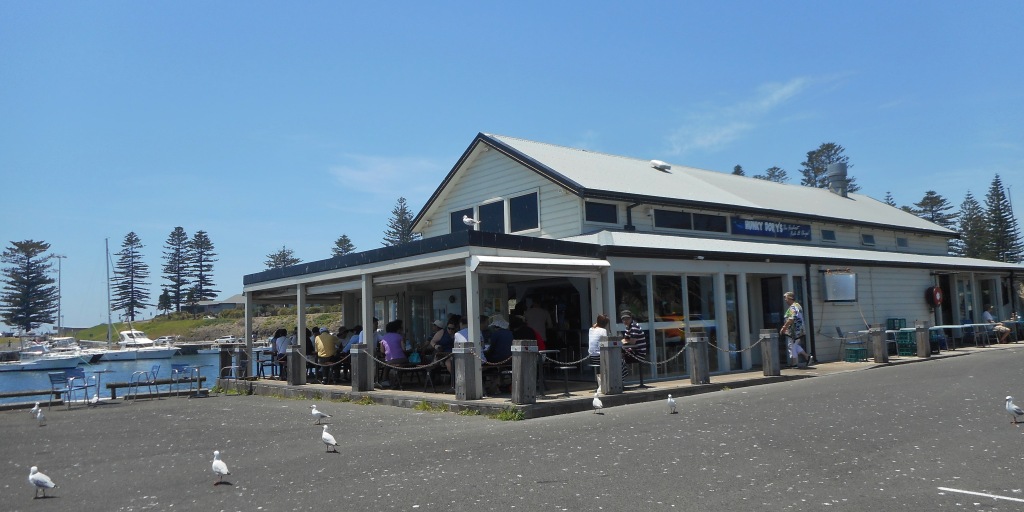 Kiama Harbour was just beautiful on a day like this. We spent about an hour there. By one o’clock we were back in Kiama’s main street and were looking for a parking spot. Peter found some parking near the police station and got out of the car to take some pictures of the surrounding buildings. I took some picture from inside the parked car: 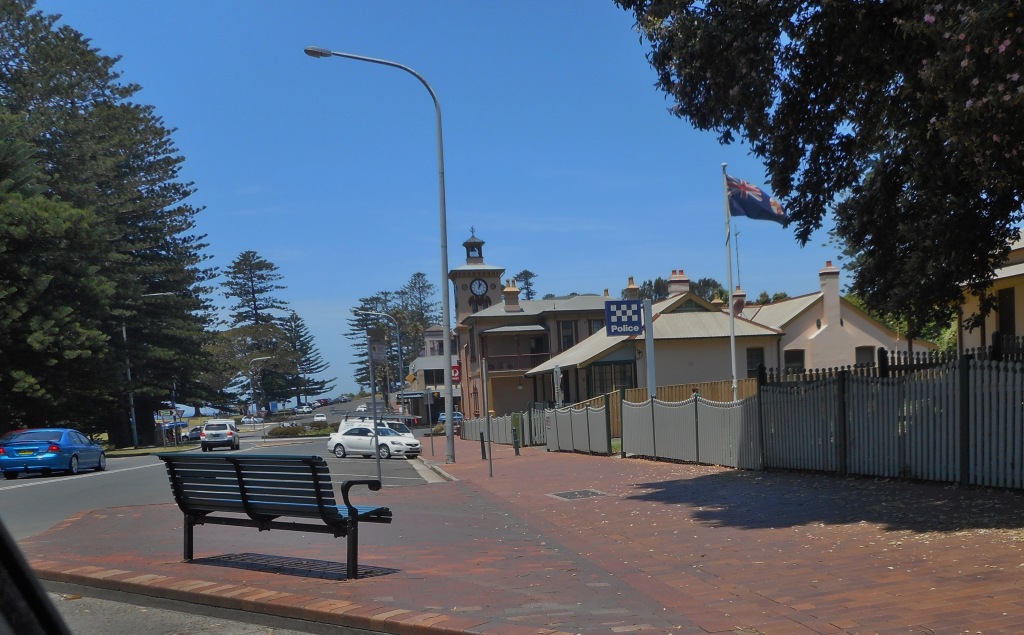 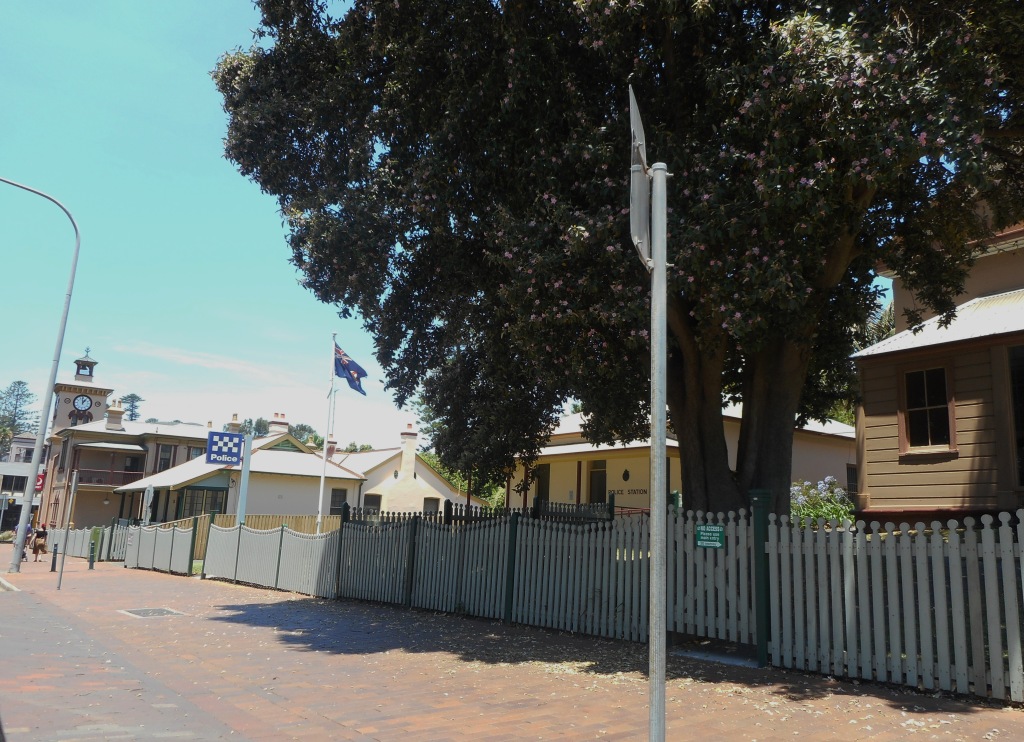 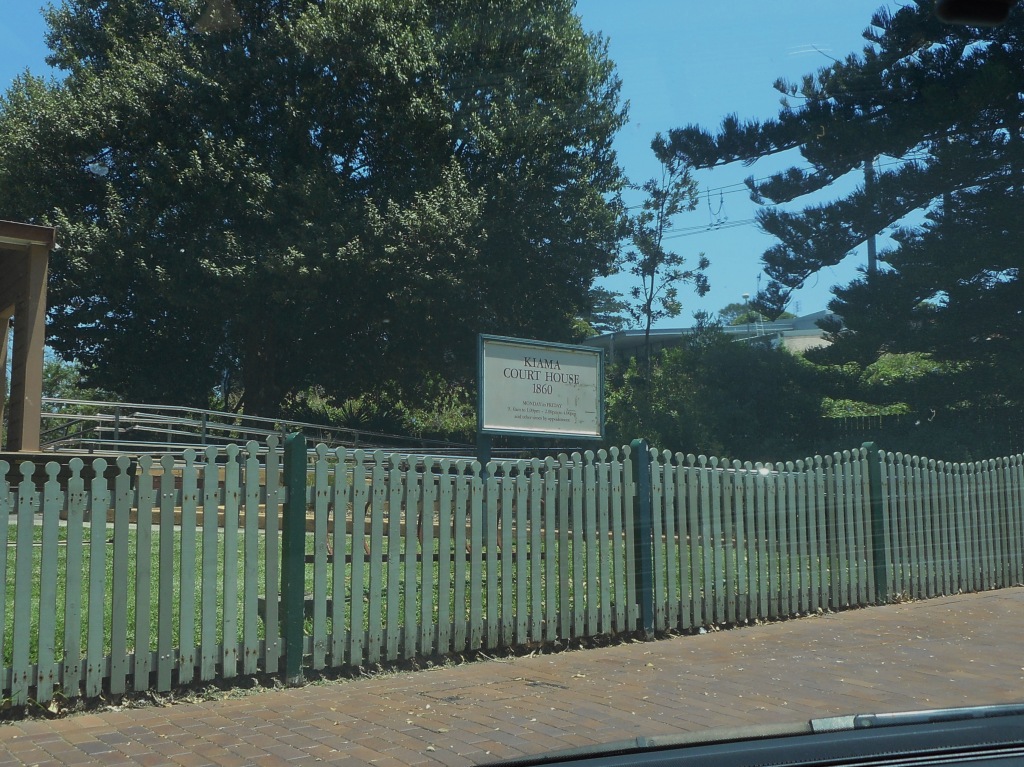 Then Peter found another parking spot closer to the shops. It was close to some shops, but the ice-cream shop was still quite some distance away. Where we had parked, we could smell some coffee. And there was a nice sitting area under umbrellas outside. We noticed a display of yummy cakes. So we sat down outside and a friendly girl came to take our orders. Apart from flat white coffee and cake we also asked for some water, which arrived in a beautiful blue bottle.

We ended up driving home without having had any ice-cream. Well, we can go back to Kiama some other day for that yummy ice-cream in Kiama. I am sure the great Australian Ice-Creamery is still going to be there when we go there next time.

Peter was on a swing early this morning:

Sydney had a big storm: 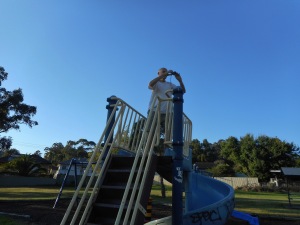 This morning Peter took some pictures from up high!

I took this picture well before Mass started on that Sunday.

I took some more pictures on that Sunday on the way home from church: 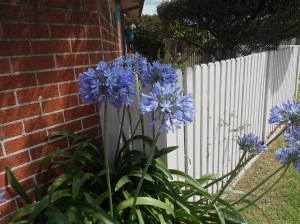 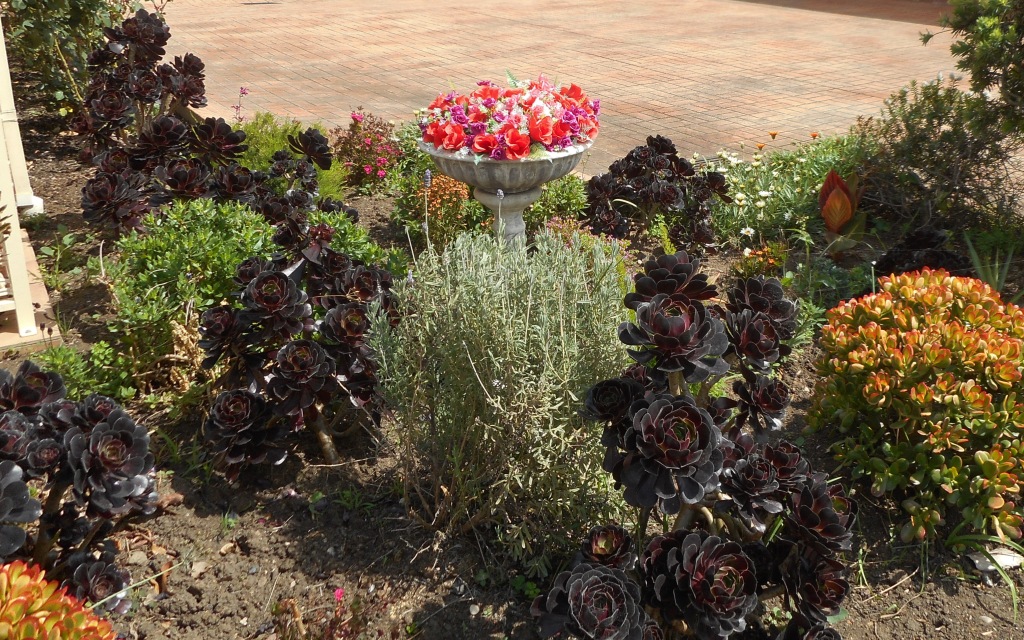 The other day we bought some Bratwurst. I had cooked some red cabbage. So we had the Bratwurst with red cabbage and some boiled potatoes. This makes a good meal. It is a German meal I do not mind having from time to time. Even in our summer this meal is rather welcome. We also had some German beer with it. I love the beer that has malt and hops in it and is devoid of chemicals!

Peter loves to eat raw slices of Kohlrabi. The other day we bought one Kohlrabi, which was quite large and, if I remember right,  cost just three Dollars. Cut into very thin slices it tasted delicious.

Sorry about the quality of the Kohlrabi pictures!

This morning Peter and I watched a few of the German Christmas songs on the above video.  There are subtitles   to all the songs which makes it easy to sing along with the different choirs. After each song is a break. This makes it easy to stop the video and continue watching some of the songs at some other time. Most of the songs we listened to were quite familiar to us except some of the texts we had to relearn. We very much appreciated that we could read the text to all the songs while the video was playing!

Yesterday, on Saturday, we had this year’s Christmas lunch of our complex. 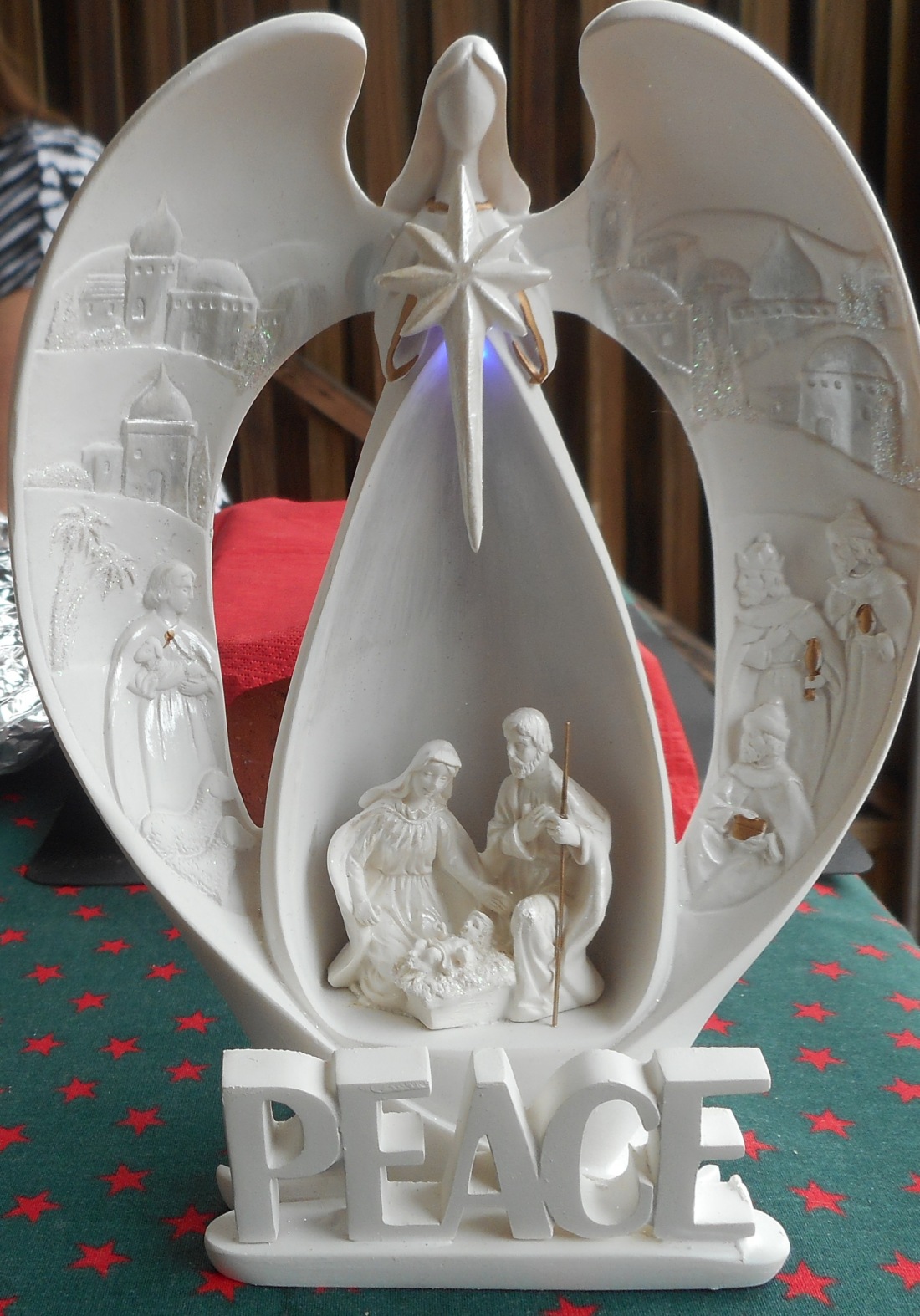 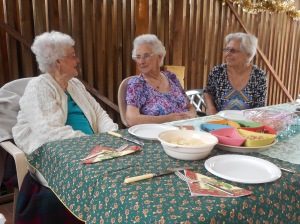 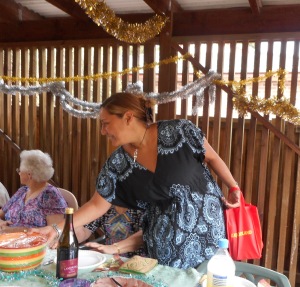 There was lots of food for lunch: People had brought different meats, cheeses, and salads, beautifully arranged on platters. (I should really have taken some more pictures!) We all brought our own drinks. As I said, Barbara provided coffee and tea making facilities. She had also set up a long table with chairs in her garage the same as last year. Marion B helped Barbara with the decorations for the Christmas party. This Christmas get-together was a great success again!

The above is the rest of a tree-trunk-cake (Baumkuchen) cut up into little pieces. There was also cheesecake, ice-cream, custard, and yoghurt as well as fruit-salad for desert.

This year Peter was the only man in our group of residents and past residents. (Stan and Jenny I think were busy with their grandchildren, and Jon and Joan had tickets for a function on that day and did not want to waste these tickets.)  Peter did fit in well with all of us ladies. We had plenty to talk about and stayed together for some three hours. All of us had a lovely time.