At this time of the year memories keep coming back about how we celebrated the Advents Sundays during the late 1930s and early 1940s. During those years we always had an ‘Adventskranz’ with four, thick, usually red, candles. On each Advent Sunday one more candle would be lighted. The ‘Kranz’ was made up of fresh fir-tree branches. When we sat down with one, two, three or four candles lit, my little brother and I would be allowed to do some ‘kokeln’, but of course always under supervision by Mum. ‘Kokeln’ would mean that Mum gave us a beautiful fresh twig of the fir-tree branches to hold over a burning candle. This made a fantastic smell. Oh, how we loved this smell. I could tell, Mum loved it too. This quickly brought us into the mood to sing some Christmas songs.

It is still early Sunday morning. We have had our breakfast with some fresh bread-rolls. We lit one candle on our artificial ‘Adventskranz’. The dishes are done now. I look out through the kitchen window and can still see some of the flowers. They usually last only for a day or two. But some more new ones may come up soon. 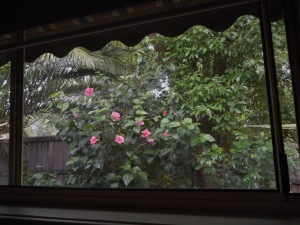 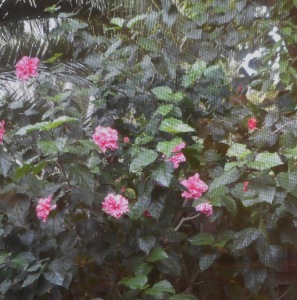 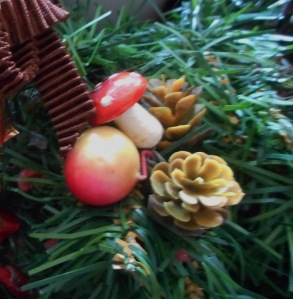 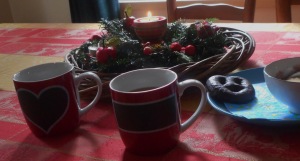 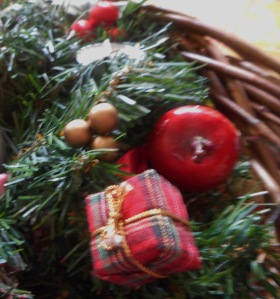 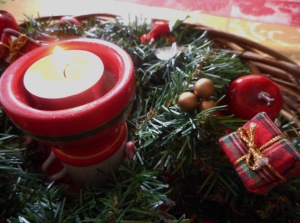 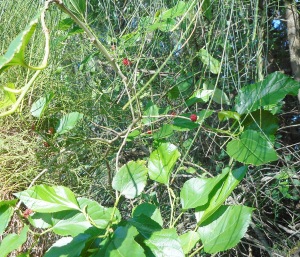 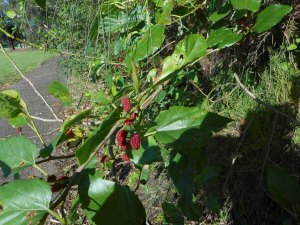 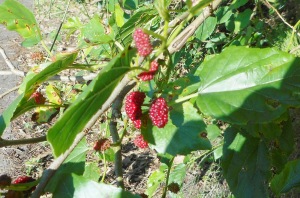 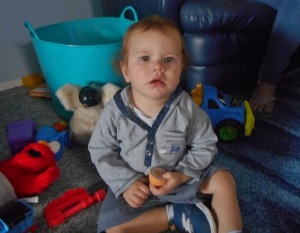 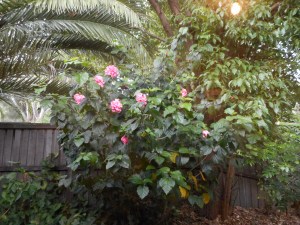 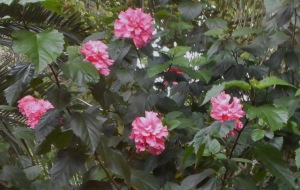 This is the first Sunday of Advent. A couple of days ago was Mark’s 54th birthday. In 2011 Mark’s 50th birthday was being celebrated.

Next Sunday, on the 6th of December. we are going to meet the family again to celebrate some more birthdays.

The other day at Merrylands we bought this NATURAL SOURDOUGH bread. I just have been eating a few more slices of it. This bread tastes very yummy! It is called ‘Roggenmischbrot’. It is a product of Australia and has a ‘true European taste’!  There were 650g of it for five Dollars. I think, it is very good value.

Last Saturday we went to the Griffin Theatre in Sydney. We went to a Japanese Restaurant before the theatre. Caroline and Matthew were with us. I had a vegetarian dish, which was very good. I liked it a lot. 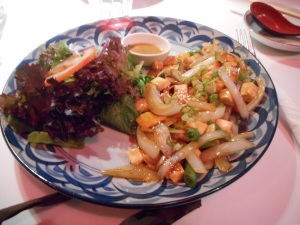 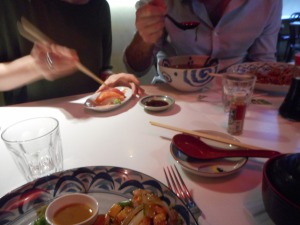 On Friday the 13th our group of women went out for lunch together. This had been quite a hot day too. After lunch we were at Erika’s place for our game of Scrabble, for coffee and cake and later on we played Rummy as we always do on a Friday afternoon. Today is Friday again, and I just came home from our games afternoon at Irene’s place. 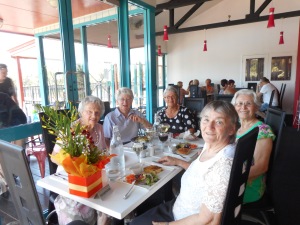 Yes, Merrylands Shopping Centre is now a lot larger than it used to be. Gaby did experience the second stage of the opening, but she died before the third and last stage was ready for opening. After we had our lunch and some coffee in Merrylands last Wednesday we spent a bit of time to walk through the new section of the Shopping Centre. (I think the outside temperature was close to 40C on that day!) As we were walking along all the new little shops, Peter was looking out for a shop where he might find some delicious continental bread. And he was lucky: He was able to buy a ‘Roggen-Mischbrot’. It was sliced,  cost only five Dollars and was quite fresh. 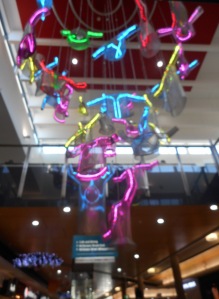 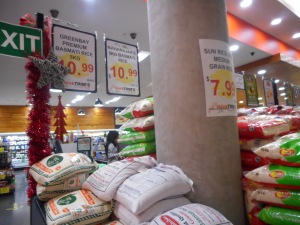 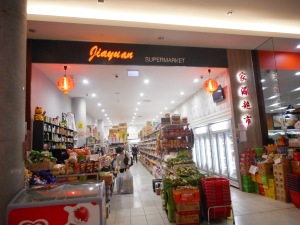 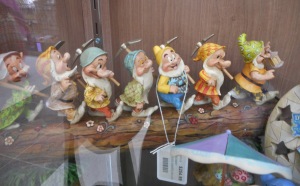 Last Wednesday we went to Merrylands.

It was a very hot day. We had lunch in Stockland Merrylands and a cup of coffee later on.

Many things had changed since we last had been in Merrylands with Gaby. But we noticed that the Heart to Heart Cafe was still there. 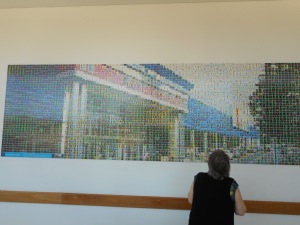 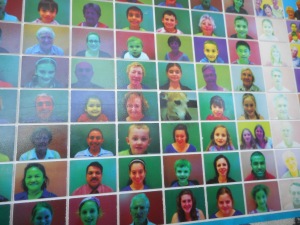 Notmsparker inspired me to want to watch all three documentaries about the Lost World of Communism.
I already watched the first documentary. A lot of things in the GDR (German Democratic Republic) I would not have liked.
Maybe for a young child, if you had parents who could lead a comparatively ‘normal’ life, it was not such a bad place to live. Most adults and older children were always in danger of being prosecuted. This is the way I see it. During the 1980s this so called workers’ paradise took some really bad turns. This documentary about the GDR shows quite a few things how more and more people got disillusioned about their so called ‘paradise’ even though to some extend ‘normal’ life did go on.

NotMs Parker writes how “it is quite painful to be confronted with often negative and disparaging comments about what life in Eastern Europe before 1989 must have been like.”
There is a great BBC film included about life in East Germany which provoked NotMsParker’s post.

A little Communist, Notmsparker, in Poland in April of 1980.

What happened in Europe in the late 1980s – the fall of the Berlin Wall, the end of communism in Poland, perestroika in the former Soviet Union as well as the collapse of a whole social and political system east of the Iron Curtain – had immense consequences not only of political and economic but also of very personal nature.

Suddenly your world was no longer there. All of a sudden, none of the rules you lived by or traditions you followed mattered. It was by all means a good and welcome change but also one which, as always, came at a price.

For those born in those lost countries, even today, it is quite painful to be confronted with often negative and disparaging comments about what life in Eastern Europe before 1989 must have been like. “Grey” is the…

We could hear the helicopter landing on Lakelands Park Oval. We found out later that there had been a horrific accident in Fowlers Road. A motorcyclist had been losing control of the bike and crashed into a parked car. The guy was airlifted to a Sydney Hospital with severe injuries.

Queen Rania: Let’s Drop The First ‘I’ In ISIS. There’s Nothing Islamic About Them

Posted: 07/03/2015 LONDON — Queen Rania of Jordan said Thursday evening that there is nothing Islamic about the self-proclaimed Islamic State, or ISIS.

She was speaking with Huffington Post Editor-In-Chief Arianna Huffington as a part of The WorldPost Future of Work Conference.

Here is an extract of what Queen Rania said in this interview in March. For the full interview please go to the above links:

“Queen Rania said she thought there are different reasons people join ISIS, including desire for a sense of belonging, for adventure, for a job and/or for the religious rhetoric. She said she sees it as a pyramid:

At the top of the pyramid are those who actually generate that ideology, and I think they’re the worst. Fanaticism and extremism exists in every religion but it always remains on the fringes. And I think what makes it drift to the mainstream is the fact that they were supported. Some did support them with money, and they provided them with the infrastructure, which allowed them to then spread that ideology a lot more.
At the middle of the pyramid are those who … [believe] that there’s a political injustice. That they don’t have a stake in their own societies. That there’s no justice. And I think at the bottom of the pyramid are those who are probably uneducated and suffer from poverty and unemployment, and they are the most vulnerable. Apart from those on the top, it’s vulnerability that makes people fall prey to their kind of rhetoric.
Because there are different reasons why people join, she said, the fight against ISIS needs to be undertaken at different levels — including militarily. “But this can’t just be won on the battlefield,” she said. “At the heart of this war is ideology, and you cannot kill an ideology with a bullet. You can only kill it with a better idea.”

I think this pyramid of reasons is very well explained. Last night we opened a bottle of red wine. I had been a hot day. Our room temperature was still 27C. Our motto was always to drink red wine at room temperature. What if the temperature was well above 20C? I urged Peter to keep the opened bottle in the fridge. This morning I happened to notice an article about red wine in the Huffington Post. Here you can read it:

Among other things they say in this article: “Red wine drinkers, prepare to have your minds blown — when a winemaker says you should serve at ‘room temperature’, they’re not talking about the temperature of an Australian room.

The antiquated term dates back to medieval French drawing rooms which were about 14-16˚C and the average Aussie living room is closer to 20˚C.

So basically our wine-drinking habits are the European equivalent to drinking warm beer.”

Likeitiz says: “We need to unite and be an even greater global force many times over than what we are facing. Can we spare some of our individual freedoms for now to make this possible? For the greater good? Can we be kins long enough to overwhelm this gigantic pustule that’s been pulsating and enlarging over in the middle east, threatening to spew its putrid doctrines to contaminate the rest of the world?”
Please read her blog. I think it is very well written and makes you think about a lot of things after the Paris attacks.