Camphor Laurel, they are very persistent!

These are very recent pictures.

I am looking forward to go today for another walk across the grass in Lakelands Park. Yesterday I had meant to write about certain things, however one thing or another kept me pretty busy  until lunch time. And when after an early lunch I finally could spend a bit more time on the computer I nearly forgot that at 2 pm I wanted to be at my  neighbour’s place for our Friday games afternoon together with two or three other neighbours. This get-together we always enjoy very much. So at 1,30 it suddenly occurred to me, that I had to get ready for my afternoon away from home. Luckily,  I still made it on time. This meeting with the neighbours is very important to me. It is a good way to not loose contact with all of these neighbours.

I thought, I had saved what I had written yesterday. So I went to yesterday’s draft savings. And I only found this bit:

“Today, both of us were awake before six. We are looking forward to another busy day. After breakfast I would like to go for my little walk in Lakelands Park, the same as every morning.”

The above bit is what’s left of yesterday’s earlier writing that I think I had done before breakfast.

The hour’s writing I had done yesterday between 12,30 and 1,30 pm has all gone. I had written about how to discard most of our books. I also had mentioned what was going on yesterday in Berlin about a World War Two bomb disposal. This writing has all gone. Ah well, I  did not like it very much anyway. So today is another day.

We already found out that the bomb disposal went well. Everything is back to normal in Berlin. This disposal was a major undertaking for they dealt with a 500 kg  bomb in the midst of Berlin near the central city railway station (Hauptbahnhof), a lot of public buildings, a hospital, as well as quite a few residential buildings. All this had to be evacuated. Really a major undertaking that required a lot of planning.

There is always a lot of building going on in Berlin. During excavation work it happens frequently that they still find World War Two bombs that have not exploded yet. And this after well over 70 years!

by Neutrino on January 1, 2012 in Blog, Featured, GoGlossary!
The technical definition

PERMA is an acronym for a model of well-being put forth by a pioneer in the field of positive psychology, Martin Seligman. According to Seligman, PERMA makes up five important building blocks of well-being and happiness:

MY THOUGHTS ABOUT POSITIVE EMOTIONS:

I DO FIND IT VERY INTERESTING WHAT MARTIN SELIGMAN SAYS ABOUT POSITIVE EMOTIONS. IT SEEMS TO BE VERY IMPORTANT THAT EDUCATORS FOSTER POSITIVE EMOTIONS IN CHILDREN.  WHEN WE MOVED TO AUSTRALIA WE WERE AMAZED TO FIND THAT LITTLE CHILDREN AT SCHOOL WERE CONSTANTLY BEING PRAISED FOR SOMETHING OR OTHER. IN OUR EXPERIENCE OUR UPBRINGING IN GERMANY DID NOT EVENTUATE WITH A LOT OF PRAISE FOR EVERY CHILD.

I WOULD AGREE THAT BEING COMPLETELY ABSORBED IN ACTIVITIES IS A GOOD THING. I  IMAGINE IT SHOULD BE POSSIBLE TO FIND FOR EVERY CHILD ACTIVITIES THEY LIKE SO MUCH THAT THEY CAN BE COMPLETELY  ABSORBING FOR  THE CHILD.

AND IF A CHILD FEELS CONNECTED TO OTHERS FOR SURE THEY WOULD ALSO FEEL THAT THEIR EXISTENCE IS IMPORTANT TO OTHERS.

A CHILD WOULD GET A FEELING OF ACCOMPLISHMENT AND SUCCESS IF IT KNEW THAT THERE ARE THINGS HE OR SHE CAN DO WELL OR WELL  ENOUGH  TO BE ABLE TO EVENTUALLY BE GETTING BETTER AND BETTER ON IT.

IF SOMEONE DID GROW UP WITH INSUFFICIENT POSITIVE EMOTIONS HE OR SHE MIGHT BENEFIT ENORMOUSLY BY LEARNING ABOUT THE CONCEPT OF SELIGMAN’S PERMA AND WORKING ON IT TO BECOME A HAPPY ADULT AND FEELING GOOD MOST  OF THE TIME.

I THINK I AM ONE OF THOSE LUCKY PEOPLE WHO FEEL GOOD MOST OF THE TIME. BUT THIS DOES NOT MEAN THAT I HAVE NOT FELT BAD AT CERTAIN TIMES DURING MY VERY LONG LIFE. YET I DID  ALWAYS FEEL THAT THERE IS A SLIVER LINING NOT TOO FAR AWAY. ONCE A WOMAN SAID TO ME THAT GOD DOES NOT MAKE RUBBISH. I FELT PRETTY WORTHLESS AT THE TIME. BUT WHAT THIS WOMAN SAID SOMEHOW MADE A LOT OF SENSE TO ME. DEEP DOWN MY BELIEVE HAS ALWAYS BEEN THAT EVERY PERSON HAS SOME KIND OF WORTH, AND THAT I SHOULD NOT THINK THAT I AM WORTHLESS.

“This tragicomedy is a self-ironic portrait of a young man who drops out of university and ends up wandering the streets of the city he lives in: Berlin. The film deals with the desire to participate in life and the difficulty to find one’s place.”

‘Well-being cannot exist just in your own head. Well-being is a combination of feeling good as well as actually having meaning, good relationships and accomplishment.’
― Martin E.P. Seligman

SUBSCRIBE 886
How much rubbish could you collect from a suburban beach in 30 minutes? You may find the answer confronting. Guardian Australia joins Paul Sharp and Silke Stuckenbrock from the Two Hands Project to see just how prevalent plastics are on Australia’s beaches.

I just discovered what I wrote five years ago and found it interesting reading, especially all the comments to it! Last night I started reading a story about an eleven year old girl who is unhappy for she has no”best” friend. I am curious, how this story is going to develop. Maybe I too should write a story about the longing for a “best” friend. I am quite familiar with such a feeling.

At age thirteen my best friends were Cordula and Lieselotte. The three of us started our own little club. We met several times a week. None of us had a boy-friend. However we talked about what it would be like to experience romance.  Just talking about it was very exciting!

Are we just going to let it grow forever, taking over the native flora? Or who is going to eradicate it now or keep it in check?

Australian democracy has been under threat for some time. There is a group of political operators who are able to walk the halls of parliament, arrange meetings with decision-makers at the drop of a hat, funnel big money into political parties, and influence regulations, policies and legislation. Nobody reading this will be surprised when I say that this group of powerful political operators comprises corporations and industry lobby groups.

However, unless you’ve been following the Turnbull government’s electoral funding and disclosure reform bill, you might be surprised to learn that apparently there is a bigger threat to democracy, a more powerful group of political operators in Australia – charities and community groups. That is the laughable idea the Turnbull government would have you believe. 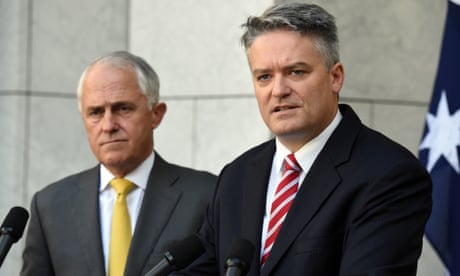 After years of donations scandals including the jailing of disgraced MPs; after witnessing the revolving door between powerful industries and MP and political staffer positions; and after over $1bn in political donations have been made – the government claims they’re finally listening to the people of Australia and addressing political donation reform.

The Turnbull government is using the overwhelming public appetite for politics to be cleaned up as a smokescreen for pushing through legislation that will curtail the activities and voice of charities and community groups.

Tim Costello, the Human Rights Law Centre, the Hands Off Our Charities Coalitionand many others have highlighted the disastrous consequences this legislation will have on our civil society if allowed to pass.

There is a glaring discrepancy in this bill. Not only does it act as a smokescreen for the government to attack civil society, it completely fails to address the actual, documented threat to our democratic system – big money.

Please go on reading this article in The Guardian here: