Did we suffer during the first years of war? I don’t think so. Except that my father had moved away from Berlin. He became the manager in grandfather’s furniture factory in Lodz, Poland, which since the German occupation in 1939 was called Litzmannstadt. My father had grown up in Lodz. His family had lived in Lodz since the early 1800s, when this part of Poland belonged to Russia.

My father had studied in Leipzig, Germany. In 1930 he had married my mother in Leipzig. During the early years of their marriage they had for the most part lived in Berlin. Sometime during the early war years my father had some disagreements with some Nazi people he worked with in Berlin. I think he didn’t voice his disagreements publicly. Had he done so, he may have ended up in a concentration camp!

In the end he was allowed to remove himself from Berlin. As I said he became then the manager in grandfather’s factory. My mother typically chose to stay with us children in Berlin. We only went for some visits to “Litzmannstadt”.

Previously I mentioned that we went to Leipzig to look for my grandfather’s burial place. Today I want to publish some more pictures about our excursion to Leipzig.

Crossing the road, we found ourselves right at what looked to us like the main entrance to the cemetery. There was a friendly lady in the building next to the entrance. She had the particulars of the graves at hand which were still under the care of the cemetery. People usually pay a fee which covers five years of care. If for any reason a renewal fee isn’t paid anymore, the grave site becomes a new plot for a new grave. My grandfather’s grave dated from February 1947. I knew that some of my cousins had continued to pay for the care of it. We even knew that the grave should be in section XXIV. I asked the lady could she please look up whether the grave-site still existed. The lady said, indeed, this particular grave was still under their care. It had been paid for till the year 2017. She showed us on the map where section XXIV was. This was it. We didn’t get any information about the position of the grave. We thought with the help of the grave’s number we should be able to find it anyway. Each grave under care had a particular number. We had the number of our grave. However to see the number you had to remove a stick from the soil. Then you could see the number underneath the stick. The problem was the numbers were not arranged in a consecutive order. We found the section all right. The grave-site number? This was another matter. We saw a young working woman who saw to the surrounding garden areas. She tried to help us find what we were looking for. She couldn’t work it out either where this particular site was. A gravestone with my grandfather’s name on it? Forget it. We covered the whole section, right left and center. We found nothing. In the end I felt rather tired and had a rest on a wooden bench while Peter kept on searching. Nothing! We hadn’t packed any food. Somehow we assumed we would be able to buy some food somewhere. But then except for flower-shops there had been nothing near the entrance. The toilet near the entrance was under repair. In the middle section of this huge cemetery there were toilet facilities which had been indicated at the entrance. Eventually we were heading for this middle section which turned out to be very beautiful: There were lovely well kept garden sections and stunning buildings with comforts, plenty of water and even a prayer room. Eating something, well, this had to wait. There was an office. Peter made inquiries. In this office every particular about every grave from way back was filed away. The lady from this office was able to give us a print-out with the exact position of the grave. Immediately we were full of hope again and we headed all the way back to section XXIV. We searched, and searched, and searched. We knew we were in the right area. Still no grave. We just could not see it! What was wrong? We didn’t know. I took another rest on that bench where I had been sitting before. Peter roamed about close by. The rest of the story is in the following pictures to be seen.

From Leipzig Hauptbahnhof we took a tram to Südfriedhof, the cemetery where my grandfather was buried in 1947. My brother had found out from one of our cousins, where the grave site was supposed to be, that is I had the correct plot number and asked at the entrance for directions. The Südfriedhof is right next to the Leipzig Völkerschlacht Denkmal. We saw it straight away when we got off the tram.

The Völkerschlachtdenkmal exists since 1913 commemorating a battle from 1813. Some restorations are being done at present for next year’s 200 year commemoration.

To find Grandfather’s grave turned out to be extremely difficult. It took us many, many hours. Yet we were successful in the end and very, very happy that our search hadn’t been in vain. I’ll write about it in some more detail some other time.

In the afternoon we had time to stroll through the city center of Leipzig. Leipzig has a lot of beautifully restored old buildings and the modern buildings seem to blend in quite well. We were very impressed.

I show here a picture of my parents’ wedding day and a picture with me as a baby; my mum and the proud grandparents looking on! I think the grandparents must have been proud of the new addition because I was the daughter of ‘Oleg’ who everyone said was their favourite son. At the time the grandparents had already two grandsons by one daughter and a grandaughter by another daughter. 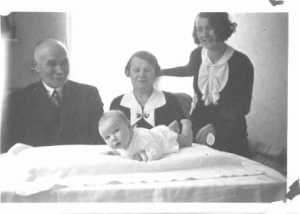 My brother Bodo was born on the 9th of June 1938. I remember waking up in the morning and being told by Auntie Elsa that I have a little brother –  ‘ein Brüderchen’. He was beautiful! I saw him lying in his cot in my parents’ bedroom.I was overjoyed that this was my brother!

That same month my Dad’s father came to visit. Uncle Adi and Aunty Elsa drove Grandad, Dad and me to the Olympic Stadium  in their huge car. There were some pictures taken in the big square in front of the stadium. I look so very happy walking along with Grandad. Mum didn’t come along with us on that day because she had to stay with little Bodo. I think she kept still to her bed at the time. So it must have been soon after Bodo’s birth which was a planned home-birth. For years to come Aunty Elsa would talk a lot about it how it eventuated. She said coming home from seeing a movie at the cinema she noticed a hanky that had been placed on our balcony so it could be seen from the street. This was the sign, that the delivery of the baby had started and Aunty Elsa got very excited and rushed up to be with her sister. Apparently a midwife had been on call all the time and the delivery went on very smoothly. I never did get disturbed by it and must have been sleeping right through the night in the neighbouring room!

We already had a telephone at the time. To this day I remember our number! I was allowed to answer the phone. I was told to say: ‘Hier bei Dr. Spickermann!’ when answering the phone.

The picture with me beside Mum’s bed looking at Bodo in Mum’s arms shows that my parents’ beds had been seperated for the delivery of the baby. Normally these two beds would have been close together.

A few months later we had another visitor to Berlin: My cousin Ursula. The picture which was taken on our balcony shows Ursula holding little Bodo and me looking on.

And for good measure I’m going to add a picture of Grandfather and Grandmother from 1934 when I was a little baby. 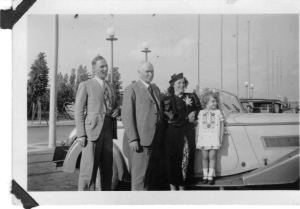 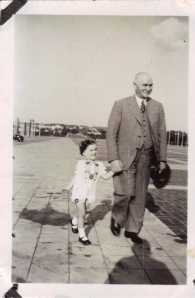 The Spickermann Family and Uncle Alfred

Mum used to say: ‘Everyone in the Spickermann Family is useless except for one, and that is Grandfather. He is the only one who works hard and has achieved something. Everyone else in the family just likes to laze about, talking stupid things and not doing any work.’

I also remember Grandfather Joseph saying of my mother: ‘Lotte is a very good worker. Oleg should be very grateful for having such a good looking and hard working, smart wife.’

For Grandmother Hilda my Mum had absolutely no kind word. She thought that Grandmother should make a bit of an effort to keep up with Grandfather. And why could she not look after her appearance a bit better? Surely with the position that Grandfather held, she should attempt to be a bit more representative looking! Instead she let herself go and was just a housewife and mother. And why for heaven’s sake did she have to spend all morning in the kitchen when she had two maids to do the cooking for her!

I cannot remember whether Mum ever commented on the competency of Dad’s younger sister Lies, who single handedly would manage a large estate when her husband Alfred had had once again too much to drink and needed some time off for recovery. I seem to remember that in a way she admired Alfred for always being able to recover after some extensive drinking bouts. He was a very tall, strong man. Mum said: ‘He could drink a real lot before adverse health effects were noticeable. Then, when he felt he could not go on any longer, he stopped drinking altogether and lived for a while just on milk until he felt all right again.’

I remember several Spickermanns debating the tough fate their sister Lies had to suffer. How Alfred’s drinking habits effected the children, especially the eldest son Horst. All this happened when the Spickermann Family still lived in Lodz, which was called Litzmannstadt at the time. Horst would have been less than nine years old then.

As far as I know, Alfred ended up in the army before the end of the war. After the war he often talked about it how well he had been treated as a prisoner on the Island of Guernsey. He kept saying what a good life he had had on this island. It sticks in my memory that the family used to say of him being somewhat ‘anglophil’. When I heard this, I was wondering why on earth they called him this. I think I had enquired about the meaning of the word ‘anglophil’. I thought by myself why anyone could imply there might be something wrong with liking the English ways. I think I always was interested in the way other people lived. I am sure I could very well empathise with someone believing that the German way was not the only way worth living! Why shouldn’t you be able to like aspects of some other culture? It seems to me that this kind of thinking I must have developed rather early.

When Peter and I went on our first visit back to Germany, we saw Auntie Lies and Uncle Alfred, who were both in good health. Alfred died one year later at the age of ninety! Having cut down on his drinking in his later years, he none the less still enjoyed drinking a bottle of wine each day right to the end of his life.