Peter’s Family during the Year after I first met Peter

When I visited Peter’s family they were always very welcoming. They lived in a small apartment on the fifth floor. There was no lift!

Peter’s mother had only one room to herself. The second room in the apartment was occupied by Peter’s older sister, brother-in-law, as well as their baby daughter. In the third room lived Peter’s Great-Aunt .

Peter slept sometimes on the sofa in his mother’s room. Every room in the apartment was used as a bedroom! However during the day, these rooms were made into cosy living-rooms. I do not know, how people managed this kind of comfort under such crowded conditions. Sundays I was often invited for a tasty hot meal at lunchtime. We were usually six people around the table in Mama’s room. Sunday afternoons there was coffee and cake for the family, often including another sister of Peter as well as her husband and baby son. I felt very much at home with Peter’s family. Another family-member was a little dog called Tussy: Every day, after its morning walk, this dog enjoyed a cup of cocoa and a dog biscuit. A very special treat indeed.

Peter’s mother had a small balcony attached to her room. The following picture of Peter and me was taken on this balcony. 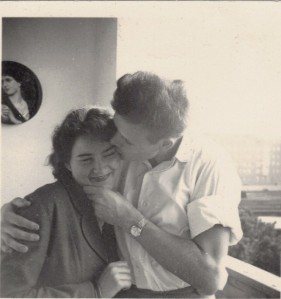