At age thirteen my best friends were Cordula and Lieselotte. The three of us started our own little club. We met several times a week. None of us had a boy-friend. However we talked about what it would be like to experience romance.  Just talking about it was very exciting!

The blockade of West- Berlin followed and I was air-lifted to West-Germany to live with Dad and Aunty Lies and her family. When I returned to Berlin I had no idea how Lieselotte was doing because we had completely lost touch. She had already turned fifteen and had left school to take up a job. Quite by chance I once noticed her walking along the street arm in arm with a boy-friend. I cannot recall what she wore, but she looked very grown up to me. I never thought of approaching her.

I continued to go to the same girls’ high-school. Many girls in my class were talking about their boy-friends. I did not have a boy-friend and did not have a clue, how on earth I could ever get to know some-one from the opposite sex. I stuck to day-dreaming. In my mind I fantasised about romantic meetings: I loved making up conversations with an interesting young man!

I had hardly any money to spend on clothes or make-up. I felt very inferior to other girls, who all seemed to be better off.

I liked to keep my hair long and just a little bit permed. I was astonished and gratified when a girl in my class said she liked my hair-style. 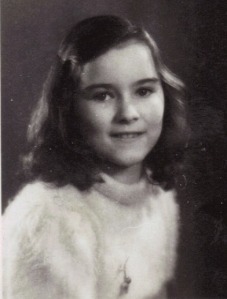