. . . . . Recently we have been visiting Benalla in Victoria.  Unfortunately, because of bad eyesight, I cannot drive anymore. So  Peter had to drive to Benalla and back all by himself. We were driving to Benalla to visit our son Martin and to see his new place. Door to door it was about 600 km only, whereas when the son lived in Melbourne (Essendon) the distance was about 800 km.

Since we are in the midst of winter now here in Australia, daylight hours are only about for ten hours, namely from ca. 7 am to 5 pm. Well, Peter had no problem driving the distance within daylight hours. However, I suggested that on the way back we could stay in a motel in Holbrook  for one night to interrupt the journey, and that would give us the chance to look around a bit and familiarize us again with some things in the area. But oh no,  Peter insisted on driving straight home. I like to call it ‘homeritis’! 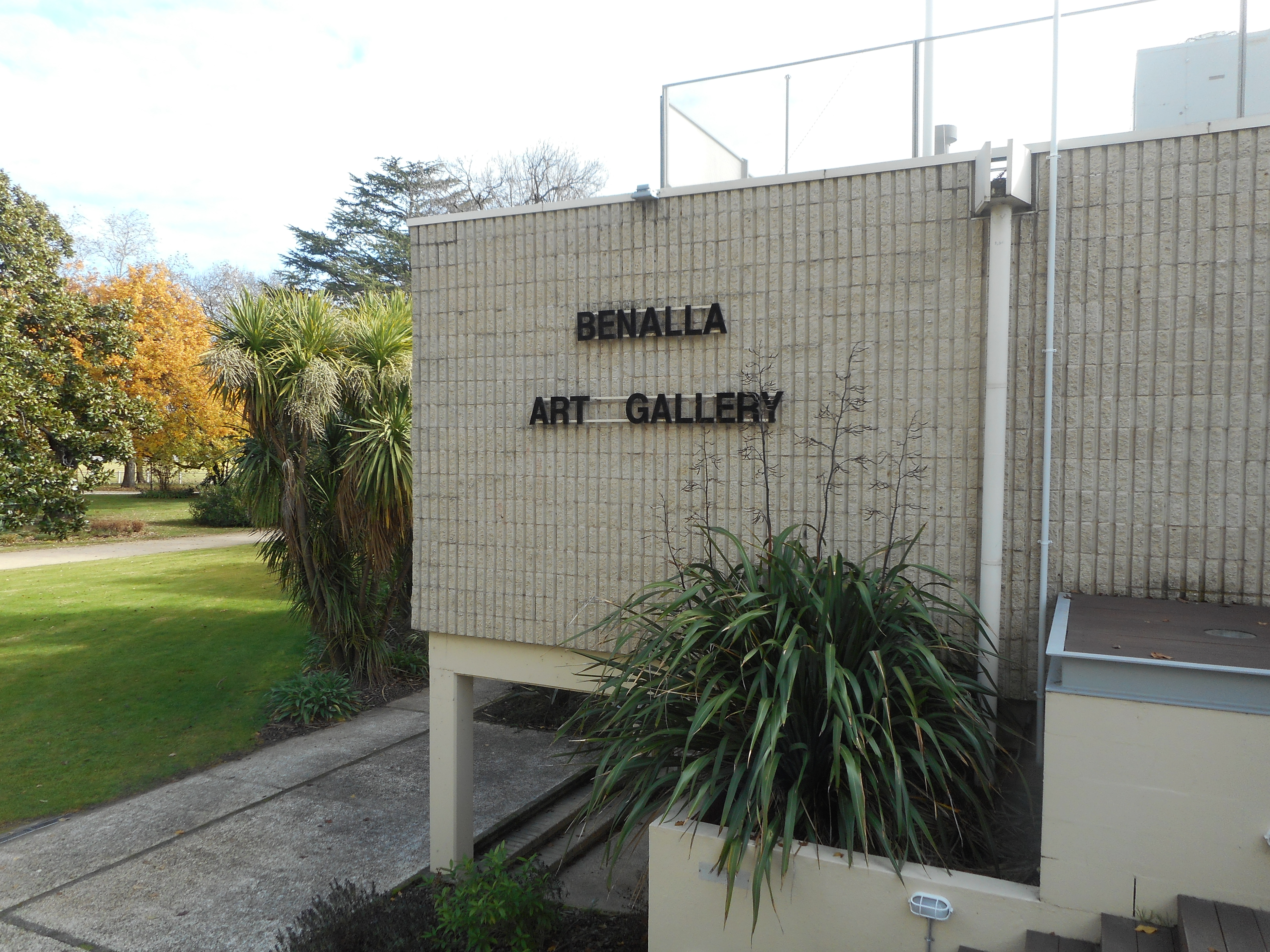 On our last day in Benalla, a Saturday, all of us went for lunch to the Art Gallery Cafe. We were very happy that our Grandson and his wife and two daughters could meet us there.

On the terrace outside the cafe.

Martin took a picture of his parents.

Son Martin took these pictures of Peter and me on the terrace of the Cafe.

It was a bit too cold to sit out there. It was better to have lunch inside. 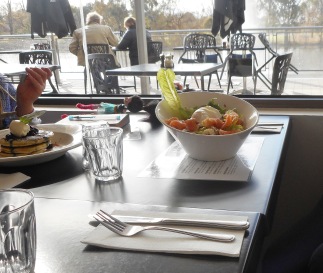 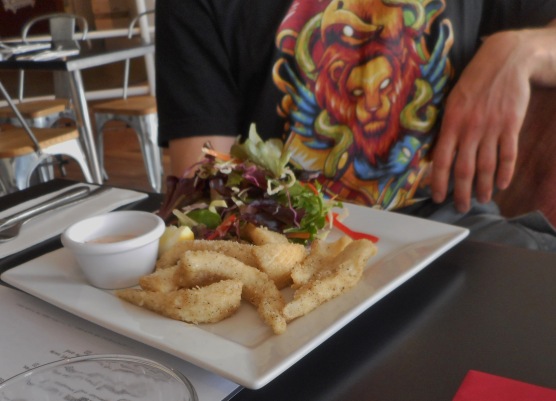 Here is some of the food that we had.

After lunch we had a look at some of the pictures in the Art Gallery. 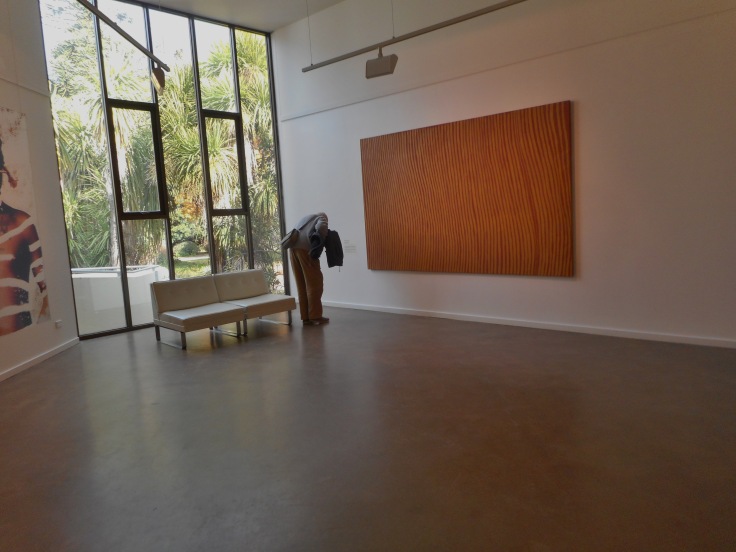 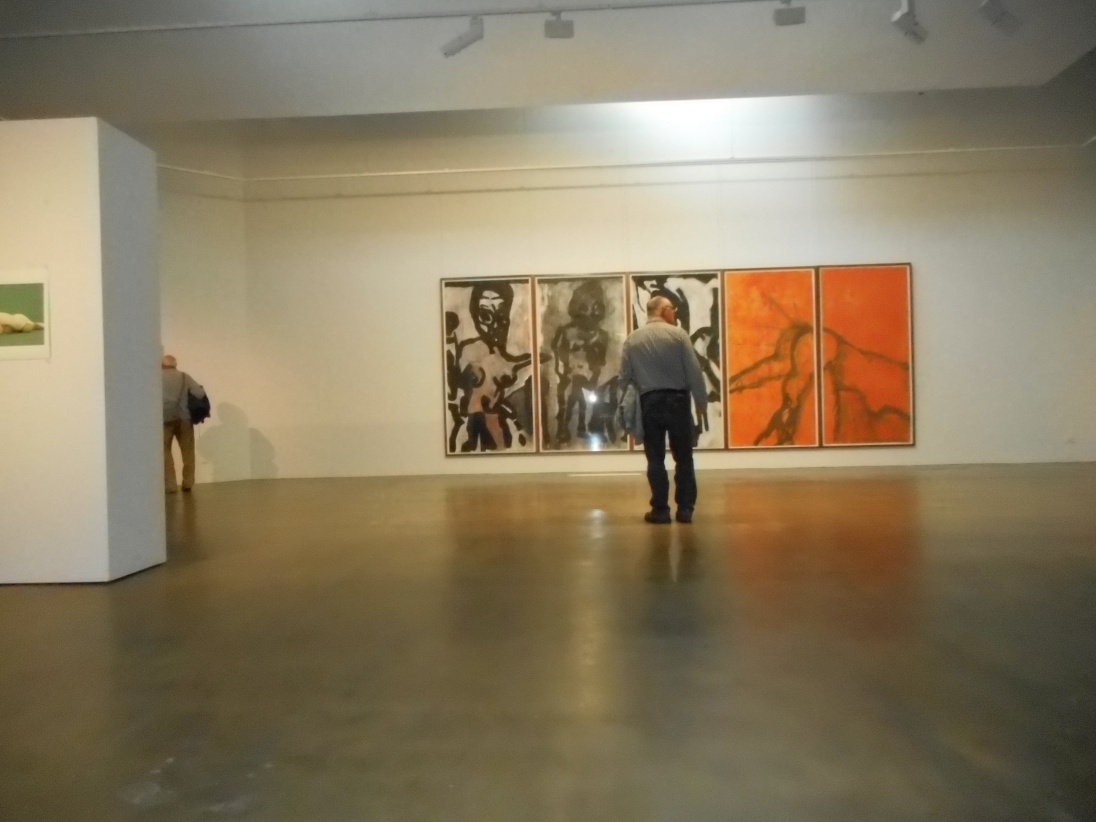 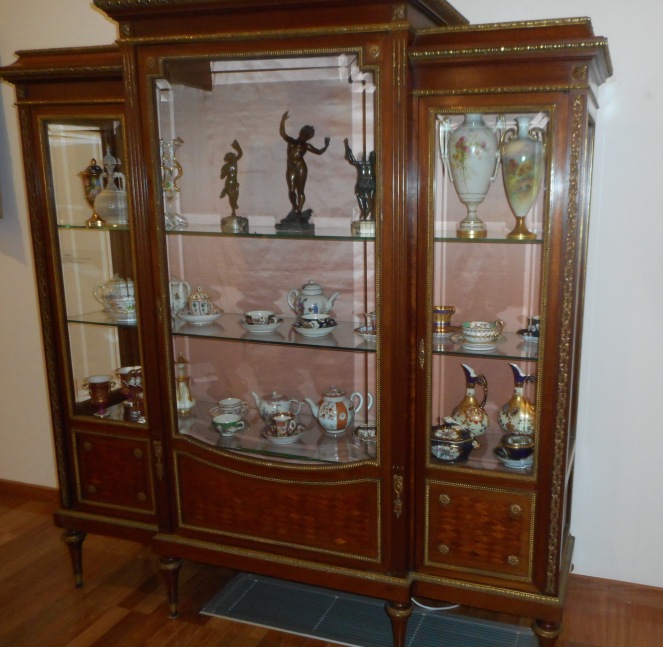 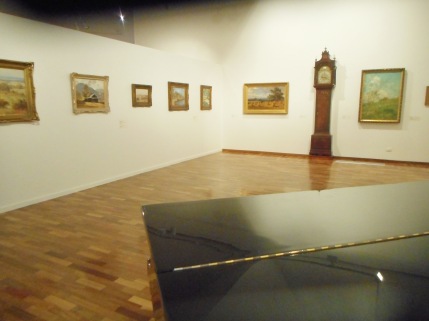 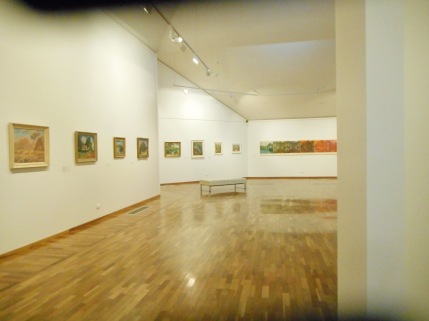 It was lovely to see great-granddaughters Kia and Jaki again as well as Tris and Steph. And now I include some more pictures from another park nearby that we took on another day. 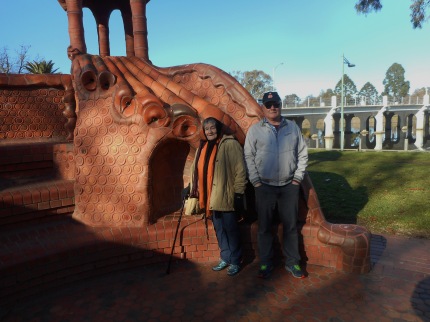 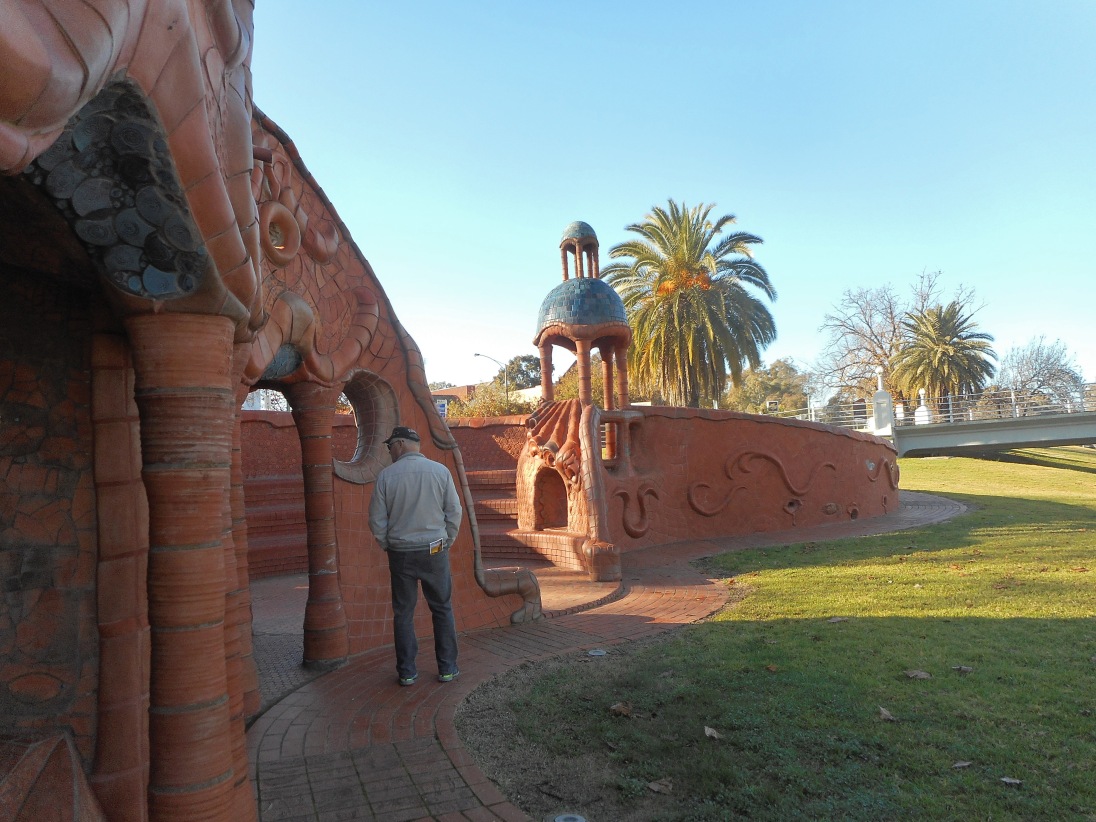 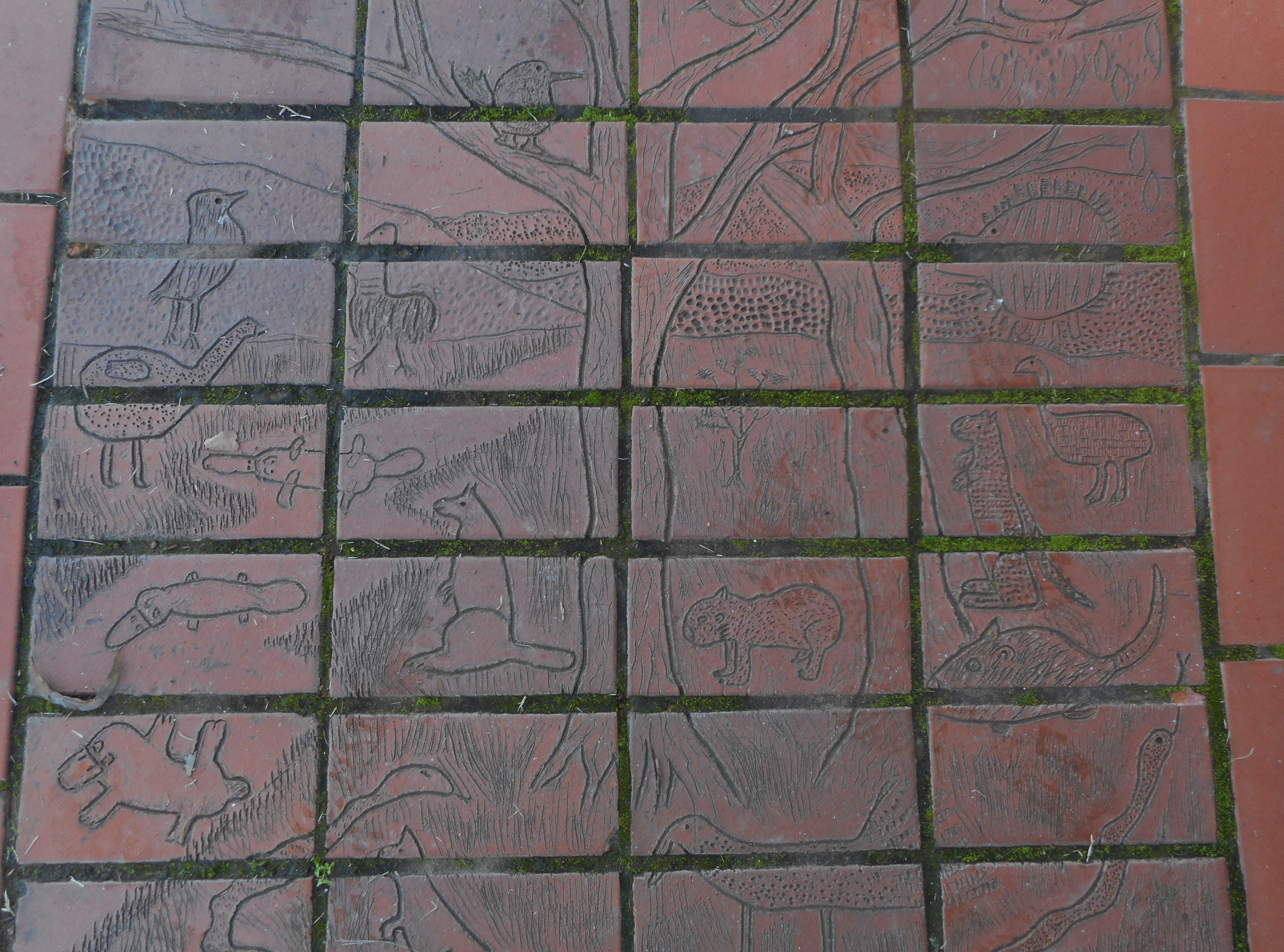 We had arrived in Benalla two weeks ago on Wednesday in beautiful late afternoon sunshine. I was very happy that we had found our son’s new place straight away and that we had made good time on our a bit more than 600 km trip. We had left Dapto early in the morning as soon as it got a bit light and we made it to Benalla before it got dark. In Benalla the air was fresh and cool, but the sun still warmed it a bit. Martin, our son, said that during the night the temperature could drop to freezing point. First thing in the morning he would look outside and check whether the birdbath had been frozen over again. In Martin’s house it was warm and cozy. A cup of tea was very welcome. Later on we had an excellent home cooked dinner.

Martin had bought a two bedroom house. We were given the spare bedroom. It was similar to what it had been like when we used to visit him in Essendon in Melbourne, where he had rented a two bedroom place. Before Martin left the place in Melbourne, he had given away most of his furniture for he was in the lucky position to take over the Benalla house with all the furniture and other things in it. This is furniture, I might say,  is absolutely great to have and very tasteful. On top of it it saved Martin quite a bit of moving. Still, he had to get rid of his old furniture in Melbourne, which was not all that easy, I guess.

The stuff that he had to move to the new house some 200 km away he packed into a hired  van. He had to return the van the same day after having travelled the 200 km to Benalla and back. Martin is 57 and not used to lifting heavy things. He’s only used to office work and a lot of walking and he even did quite a bit of running in the past. In Melbourne he did not need a car. He could walk everywhere or use public transport. For travelling he often hired a car.

Now, in Benalla, he’s already used to walking the few minutes into town. Still, he says he might perhaps buy a car sometime soon. But he’s not sure yet. At the moment he has  problems with sitting. With all that sitting at the office his back was vulnerable. Now with having had to lift a lot of stuff to clear his place in Melbourne just a few weeks ago, his back became very painful,  still is very painful  when he is sitting down or lying down. He can never sit for very long. He does most things standing up. Walking, he finds is very easy for him. So he feels fine walking. But lying down is difficult and he has trouble sleeping through the night.

Peter and I were lovingly looked after by our son as always. For the four nights in Benalla we stayed in Martin’s spare bedroom, which is the Japanese room. I show here some pictures of it: 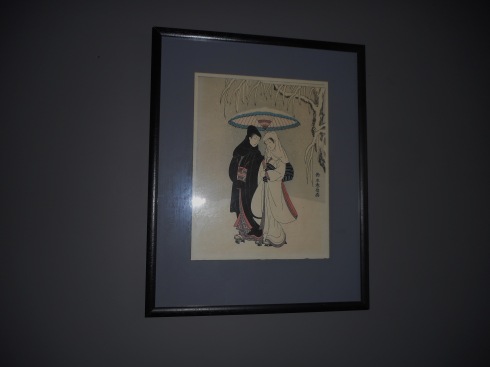 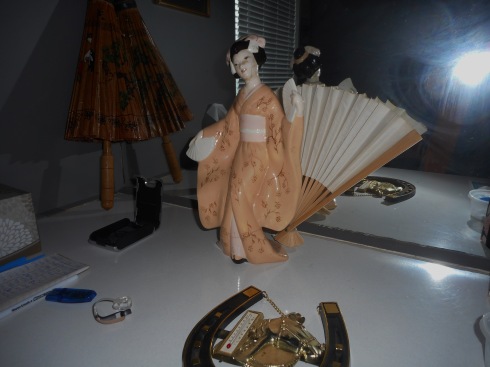 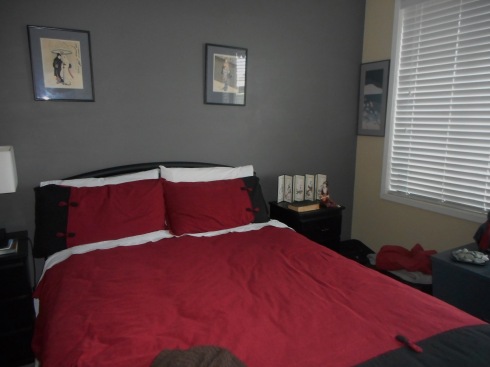 In that bedroom there was also a large built-in wardrobe. And a heater was set up for us. We never felt too cold in Benalla.