Fatefulness about the survival of the species is not new. Religious thinking has end-time built in, and for most of our sentient life on the planet human­kind has been predominantly religious. That has changed in Westernized countries, but only relatively recently, and alongside advances in scientific knowledge. Our new pessimism no longer depends on a deity to wipe out this wicked world. Since the Manhattan Project, we have learned how to do it ourselves.

Nuclear, ecological, chemical, economic — our arsenal of Death by Stupidity is impressive for a species as smart as Homo sapiens. Yet fire or flood may belong to an Armageddon whose awful grandeur may not be our fate. Plague — unlovely, heroic, unstoppable, might well get us first. That’s what happens in Margaret Atwood’s new novel, “The Year of the Flood,” her latest excursion into what’s sometimes called her “science fiction,” though she prefers “speculative fiction.” If we have to have a label, that’s a better one, since part of Atwood’s mastery as a writer is to use herself as a creative computer, modeling possible futures projected from the available data — in human terms, where we are now.

Her 1985 novel “The Handmaid’s Tale” imagines a United States taken over by God-fearing fundamentalists sick of democracy and civil rights, especially women’s rights. Atwood is chillingly brilliant in depicting the slick twists a technology of freedom can take, shifting ease of access — in this case to financial records and personal information — into theft and surveillance. Overnight, the bank accounts of every woman are transferred to her nearest male relative.

In “Oryx and Crake,” published in 2003, Atwood leads us through a bioengineered world where a new species, the Crakers, has been invented by a Dr. Frankenstein figure — Crake — and given a chance at remaking the world, thanks to a near decimation of the human race, also masterminded by Crake. At the end of that novel, we are left in a clearing in the woods with a tribe of bewildered Crakers, a few old-­fashioned human beings and Jimmy the Snowman, who’s wondering whether he should finish off the last of his own kind and leave the whole rotten and rotting show to the nonviolent, unclothed human herbivores cell-created by his best friend, Crake.

That end is also the end of “The Year of the Flood.” Here Atwood has brilliantly re-told her own tale, through other mouths and focusing on different details, showing us how the kids Jimmy and Glenn become the Snowman and Crake, and how an end — or the End — can happen in the name of a new beginning.

The Waterless Flood has long been predicted by God’s Gardeners, a back-to-nature cult founded by Adam One. Its members live simply and organically, sing terrible hymns, have no dress sense and peddle a bolted-together theology, difficult to think about if you think at all. With values diametrically opposed to those of the ruling CorpSEcorps, the Gardeners aren’t “the answer,” but at least they’ve asked enough questions to avoid a life of endless shopping and face-lifts.

The Gardeners sometimes do evangelical work in the mean streets, known as the pleeblands, or picket a fast-food joint like SecretBurgers because it’s wrong to eat anything with a face. At Secret­Burgers they rescue a young woman named Toby from the murderous clutches of her sex-crazed boss, Blanco the Bloat, and it’s Toby who is one of the central characters in the post-plague part of the story. As a Gardener, Toby rises to the position of Eve Six, in charge of bees, herbs and potions, but Blanco never stops pursuing her, and to save herself, and the group, she receives a new identity in the health spa AnooYoo. Recovering from plastic surgery, she avoids the deadly wipeout germ of the plague. 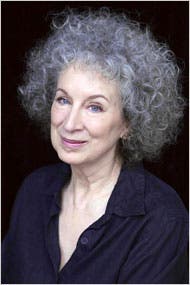 Unmarried, Happily Ever After

Sooner or Later, Zoë Kravitz Was Going to Be a Star

‘In Italy I Kept Meeting Guys’: The Black Women Who Travel for Love

Less cosmetically, but just as effectively, Ren, a pole dancer at a local sex joint called Scales and Tails, is in an isolation room after a bloody attack by a punter, so she too misses the bio-bug. The women’s past and present stories alternate and inter­twine, bringing to life the world they must survive in — a world where pigs have human brain tissue and sheep are bred with human hair in different colors, silver and purple being hot hits for whole-head implants, providing you don’t mind smelling of lamb chops when it rains.

My favorite Atwood genetic invention is the liobam — a cross between a lion and a lamb, engineered by a lunatic fringe religious group that’s tired of waiting for the prophecy of the lion lying down with the lamb to come true. Their own breed has curly golden hair and long, sharp canines, and will look at you very gently while it rips your throat out — which is pretty much the metaphor for the world of lethal paternalism created by CorpSEcorps.

The sensitive CorpSEcorps elite boy Glenn, who becomes Crake, starts out as a teenage sympathizer for the Gardeners but is too seduced by his own brainpower to trust nature. Like his friend Jimmy, Glenn doesn’t know how to love, and the awkward devotion he feels for the girl he calls Oryx is not returned. Atwood is very good at showing, without judging, what happens when human beings (usually men) cannot love. In the worst of them, like Blanco the Bloat, brutality and sadism take over. In the better of them, like Crake, a utopian desire for perfectability re­places the lost and lonely self. Crake designs out love and romance because he wants to design out the pain and confusion of emotion.

In this strangely lonely book, where neither love nor romance changes the narrative, friendship of a real and lasting and risk-taking kind stands against the emotional emptiness of the money/sex/power/consumer world of CorpSEcorps, and as the proper antidote to the plague-­mongering of Crake and Jimmy, for whom humankind holds so little promise. As ever with Atwood, it is friendship between women that is noted and celebrated — friendship not without its jealousies but friendship that survives rivalry and disappointment, and has a generosity that at the end of the novel allows for hope. Atwood believes in human beings, and she likes women. It is Toby and Ren who take the novel forward from the last page, not the genetically engineered new humans.

Atwood is funny and clever, such a good writer and real thinker that there’s hardly any point saying that not everything in the novel works. Why should it? A high level of creativity has to let in some chaos; just as nobody would want the world as engineered by Crake, nobody needs a factory-finished novel. The flaws in “The Year of the Flood” are part of the pleasure, as they are with human beings, that species so threatened by its own impending suicide and held up here for us to look at, mourn over, laugh at and hope for. Atwood knows how to show us ourselves, but the mirror she holds up to life does more than reflect — it’s like one of those mirrors made with mercury that gives us both a deepening and a distorting effect, allowing both the depths of human nature and its potential mutations. We don’t know how we will evolve, or if we will evolve at all. “The Year of the Flood” isn’t prophecy, but it is eerily ­possible.

THE YEAR OF THE FLOOD