This photo brings back happy memories about spending time in Mecklenburg/Vorpommern with my brother and sister-in-law. This photo was taken on Monday, 12th November 2012.

I am thinking back to our stay in Meck/Pom. The eight days with my brother and sister-in-law were packed full. They showed us around nearly every day. A lot of historical sites were included as you can see from some of my recent posts. Since I did not post anything at all during our stay in beautiful Meck/Pom, I had planned on catching up with it at a later time. Well, now I finally did it.

At least I sorted out all the pictures from that time. These pictures were bound to trigger a lot of memories. I am happy I was able to post a lot of the pictures as well as what they mean to me. As far as the history of Mecklenburg is concerned I must say I find a lot of it very intriguing. I became especially interested in the personal history of some of the historical figures and the social conditions over the past centuries. But of course I only scratched the surface. There is an immense amount of material at your fingertips to study.  A lot of caring people see to it that all this material is preserved for future generations. The castles and historical sites in the area attract every year many visitors. My brother and his wife knew all these places already from previous visits. Joyfully they took us to all these places. Apparently they love to go there again and again.

We saw as much as possible within the short time of our stay. During our other visit there in June 2010 we saw some  different and also very interesting places in the area. I am sure there a lot more still to explore. I’d love to be able to go there again. However the main thing for hubby and me was really to spend time with Peter Uwe and Astrid. We had hoped they would come and visit us in Australia. Sadly it looks now as though they’ve given up on this idea.

Two of the photos were taken in November 1965 in Sydney’s Prince Henry Hospital, when Gaby was eight years old. She types with a mouthstick on an electric typewriter. During the day she is strapped in a high chair, her hands in braces.
The night she spends in an iron ‘cage’ with only her head outside it on a cushion.
Since 1961, when she was struck down by polio, she has been in Prince Henry Hospital’s Respiratory Ward. During the day she attends the hospital school class. Gaby is a quadriplegic, which means she cannot move her arms or legs.

From January 1967 till September 1974 Gaby was able to live most of the time with her family, Mum, Dad, sister Monika and brother Martin. We took her on outings to the pool and to the beach. Peter, her dad, fastened her wheelchair to the back of our VW Beetle car.

As far as I renenber we took Gaby right into the water at the beach only this once when she may have been only 10. Gaby was too scared of the waves. Even to the pool she didn’t want to be taken anymore later on. 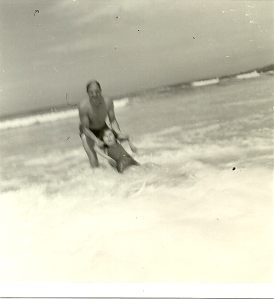 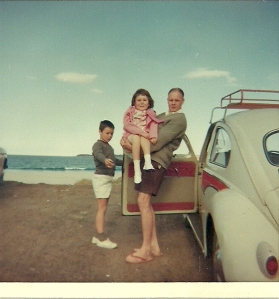 My brother Bodo was born on the 9th of June 1938. I remember waking up in the morning and being told by Auntie Elsa that I have a little brother –  ‘ein Brüderchen’. He was beautiful! I saw him lying in his cot in my parents’ bedroom.I was overjoyed that this was my brother!

That same month my Dad’s father came to visit. Uncle Adi and Aunty Elsa drove Grandad, Dad and me to the Olympic Stadium  in their huge car. There were some pictures taken in the big square in front of the stadium. I look so very happy walking along with Grandad. Mum didn’t come along with us on that day because she had to stay with little Bodo. I think she kept still to her bed at the time. So it must have been soon after Bodo’s birth which was a planned home-birth. For years to come Aunty Elsa would talk a lot about it how it eventuated. She said coming home from seeing a movie at the cinema she noticed a hanky that had been placed on our balcony so it could be seen from the street. This was the sign, that the delivery of the baby had started and Aunty Elsa got very excited and rushed up to be with her sister. Apparently a midwife had been on call all the time and the delivery went on very smoothly. I never did get disturbed by it and must have been sleeping right through the night in the neighbouring room!

We already had a telephone at the time. To this day I remember our number! I was allowed to answer the phone. I was told to say: ‘Hier bei Dr. Spickermann!’ when answering the phone.

The picture with me beside Mum’s bed looking at Bodo in Mum’s arms shows that my parents’ beds had been seperated for the delivery of the baby. Normally these two beds would have been close together.

A few months later we had another visitor to Berlin: My cousin Ursula. The picture which was taken on our balcony shows Ursula holding little Bodo and me looking on.

And for good measure I’m going to add a picture of Grandfather and Grandmother from 1934 when I was a little baby.

During the summer of 1940 we were on holidays at the Baltic Sea. We had rented a small cottage. Auntie Ilse was staying with Mum, little Bodo and me most of the time. Our maid Gertrud was with us too. Dad worked during the week in Berlin and came to Graal only on weekends.

Two year old Bodo must have already been quite a walker. I remember that Dad took us for walks in the nearby forest where we would be looking for blueberries. These berries were quite delicious. We would eat them for supper with some sugar and milk.

The beach was not far from our cottage. We went there every day. A photographer had a shop close by. During the day he often took pictures of people on the beach. The following day he displayed the pictures in front of his shop ready for sale. I think people did not order to have their pictures taken. They bought them only if they happened to like them.

In my files I have two of these pictures. They are more than seventy years old now. I was reminded of these pictures when we went to an Australian beach the other day. In one of these old pictures you can see my father with my mother and Auntie Ilse. The women sit in their ‘Strandkorb’. These ‘Strandkörbe’ are very popular on all German beaches. They are popular still to this day. They are a good wind shelter. I think people usually place them in such a way that they can catch the sun. Mum and Auntie Ilse were always proud of their suntan. 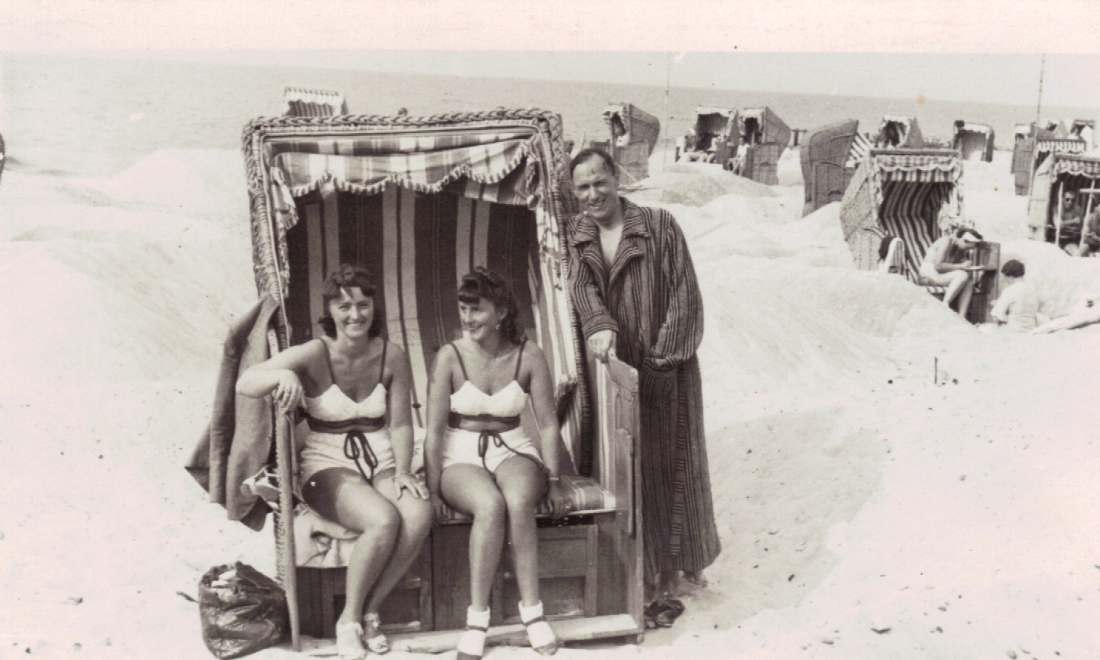 The other photo shows me with Bodo,  my little brother.