In my previous post I mentioned the Concordia Club at Tempe and that we had a family lunch there. I could actually not publish any lunch photos for I completely forgot to take a few pictures of our food. But I was thrilled to get such beautiful pictures of little Lucas running around on the lawn in front of the club with a few older boys who look like they are very much enjoying watching this cute little boy running around and picking up their ball.

Lucas did get a bit tired after lunch. Ryan and family had their own transport and went home soon after lunch with Lucas probably falling asleep in the car! They gave Monika’s daughter Kristal a lift too. Martin and S had been in Sydney only for the weekend. Mark and Monika gave them a lift to the airport in the early afternoon so they could catch their flight back to Melbourne.

When Mark and Monika came back from the airport they gave us a lift home. Mark was the driver. Near Bulli Tops he asked us would we like him to stop for an ice-cream. It turned out they had delicious ice-cream at Bulli Tops. We all enjoyed it very much. Plus we had a terrific look down the escarpment towards the Pacific Ocean. Peter thought of taking some iCloud pictures. I am happy to publish them now.

Earlier on while we were waiting at the Concordia Club for Mark and Monika to return from the airport, Caroline and Matthew were still with us. A very friendly young fellow sat with us at our table outside. During the conversation we found out that his sister is married to a German and lives in Berlin where he has been visiting twice. He said that he liked Berlin very much. We told him about our connection with Berlin. And so it went. He then offered to take some pictures of the four of us. Here they are: 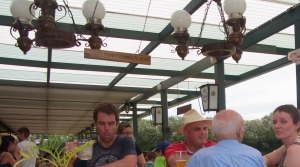