After about two hours in the Day Surgery waiting room Peter was taken to one of the Holding Bays. I was allowed to go with him.

Peter had been given a hospital gown to change into. The nurse took Peter’s blood pressure and put some stockings on him.

At 1,15 pm Peter was taken into the Operating Theatre and I had to leave. Peter had had no food and no drink, not even water, since 9,20 the night before! He could have consumed something till midnight, but he chose to go to bed early.

I had had a bit of breakfast before we left at 9 am. I welcomed the chance to go for some lunch when Peter went into surgery. I took a bus down to the Mall and went up Keira Street to the Indian Restaurant where we had been on the 9th of December when Peter had had the other operation. On the 9th of December happened also to be Caroline’s birthday. Caroline took some carer’s leave, Matthew was on leave from Uni and Monika was on her annual leave. This is why they all could stay with me and we all had lunch together in that Indian Restaurant.

This lunch turned out to be delicious. When I returned to the hospital by 3 o’clock, I was told that Peter had only just come out of surgery and was in Recovery now where I could not see him. The receptionist advised me to come back by 5 o’clock. I passed the time having coffee at the Hospital’s Cafeteria. Next to the Day Surgery Centre is a beautiful spacious lounge room as well as an outside terrace with quite a few seats. First I tried the terrace, but it soon got too hot there in the afternoon sun. So I found a lounge seat next to a table with several magazines. One magazine announced that Prince Harry is getting married in September. I also had our TIME magazine with me. In the TIME magazine I found for instance a very interesting article about sleep. The following is one section of that article which confirmed my belief that 7  hours sleep each night is the most healthy.

The following two links show what I wrote about Peter’s operation last December.

Shortly before 5 o’clock I went back to the reception desk on floor 1 near the main entrance. According to their computer Peter had just been released from Recovery and was about to be taken to B 4 East.  I then took the lift to level 4 , where Peter had just arrived and was given a bed in the ward that is mainly for Urology patients.

Peter soon could send messages from his phone: One message to Monika, who was still at work in Wollongong, the same message to Caroline and Mathew in Sydney and also to our son Martin in Melbourne. They all were happy, that the operation did go well without any complications.

On Tuesday, the day of the operation, our daughter Monika had changed her shift from 9 o’clock start to 10 o’clock start so that she could pick us up and drop us off at the hospital. After her shift, which ended at 6 pm on that day, Monika came to the hospital to see Peter and then take me back home to Dapto.

I ended up being extremely tired when I arrived home that night. Regrettably,  I had then some quite restless sleep that night, but got out of bed very early the next morning because I could not go back to sleep.

Monika came again to pick me up to take me to Wollongong where she had to be at work already at 9 o’clock. We left early to beat the traffic. Shortly before 8 am I was already in the hospital and could go straight to the ward to see Peter who had just received his breakfast tray. The policy in the hospital is, that one person is allowed into the ward from 8 am on already. From 10 am on more visitors are allowed in. Peter was happy that I could come in early.

Peter stayed in the ward till lunch time. One woman in Peter’s room had to cancel her meal, probably for some medical reason. We never talked to her, for she was behind a curtain. But the nurse offered me the spare meal which was Mac/Cheese. I accepted and really enjoyed this meal. It was an excellent meal. Very tasty! Peter had a meal with lots of vegies and some chicken.

We know that Monika had to work till 5 on that day. To ask her to take us home would have meant many hours of waiting time. Peter felt well enough, to go to Dapto by bus and catch a taxi back home from near the bus stop in Dapto.

A sister said she’d have to ask the doctor whether it was ok for Peter to go on the bus. Luckily the doctor said it was ok. So with great relief we were home by early afternoon.

As compared to the operation in December Peter recovered this time much more quickly. This is really good.

I do not need blood pressure tablets anymore!

Well, this is a long story. It actually started the day I had my Carpal Tunnel Release operation.  On that day at six o’clock in the morning I was allowed a cup of tea and a very light breakfast. Then I had to wait for more than twelve hours before I could have as much as a glass of water or a cup of tea. I was told ‘nil by mouth’ before the operation, which was to last for only a short time, maybe twenty minutes. Unfortunately I was the last one on the list. Which would have been all right, if everything had gone to plan. However there were some unforeseen delays during the day, which meant my operation was postponed for many hours. I sat in the hospital waiting room, waiting, waiting, waiting.

Finally, well into the evening, it was my turn. What a relief! A lot of precautions, needles stuck into me here, there and everywhere while I was lying on the trolley waiting to be let into the operating theatre. The anesthetist thought I was very relaxed. Then my surgeon came out to greet me. After a little while the doors opened and I was rolled into the room where the procedure was going to take place. There was some background music which I thought wasn’t soothing at all. However I didn’t complain. The surgeon must have felt that this was not my kind of music. He asked me what kind of music I liked. All I could think of saying was: Something ‘classical’. Whereupon the lovely surgeon saw to it that ‘Sound of Music’  with Julie Andrews was put on.

I had been given local anesthetics only. So I could listen to the music during the whole operation. Everything went smoothly, except as they later told me, my blood pressure went up a bit much. They advised me to see my GP (General Practitioner) about it.

To cut a long story short. I did indeed see my GP. My blood pressure went sky high that night when I saw the doctor after many hours of waiting. He did consider to put me into hospital. Luckily the blood pressure came down a bit after a little while. So the doctor let me go home. He prescribed blood pressure tablets and even valium. Peter and I did get my prescription drugs at a close by late night chemist, which delayed us getting home by another half hour. I took the blood pressure tablets as prescribed, but not the valium. I really felt relaxed enough by the time I got home and had no trouble going to sleep.

The GP had asked me to see him again the next morning so he could check on me whether I was all right. By the time I got there at 8 am, there were already eight patients in front of me. So I had to wait again. The tablets turned out not to agree with me. They made me feel sick. Eventually the doctor  organised a 24 hour blood pressure test for me. This test showed that my blood pressure was up only slightly during the day, and during my sleep it was absolutely perfect.

Yesterday I did get the marvellous news that I did not have to take the tablets anymore. The doctor said to me, on a day when I felt under a real lot of pressure, I may perhaps take a valium tablet. But not to do this too often for these tablets can be addictive.

After he said all this we wished each other a Happy Christmas and I left his office in a really great mood! 🙂

This picture was taken on Thursday, 21st November 2013, the day after my operation. We were out for ninety minutes. When we arrived back home we soon noticed that our place had been burgled. 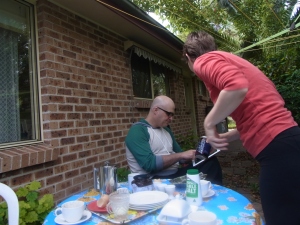 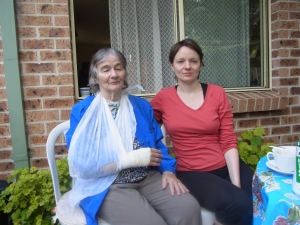 On that Thursday we had had breakfast with Caroline and Matthew in our backyard. Little did we know on that beautiful morning that we would be burgled on the same day while we were out for lunch! 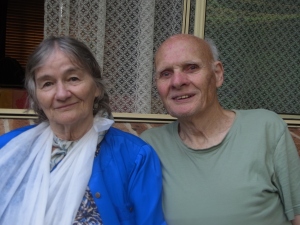