Only one week ago I published a blog about my daughter Gaby. Since then quite a few changes in Gaby’s World came about.

There’s an organisation ‘Respite Carers’ who helped Gaby a great deal to get more funding for continuous nighttime caring. The funding however applies only for the following two weeks. For the moment Gaby is somewhat relieved that the next two weeks are being taken care of.

Before Gaby got the good news about the new funding arrangements she was immensely upset and close to tears for it looked very much like, if nobody could stay with her overnight, she might have to be taken care of in an institution. All this made Gaby terribly anxious. Seeing her ‘independence’ slipping away, I think is one of the worst things that could happen to her. In her distress Gaby was somewhat lucky again because some people with some kind of authority took pitty on her and did their utmost to help her out. I’m sure she is very grateful for this. One person who looked into Gaby’s case meant the new arrangements wouldn’t ‘look good on paper’, but still was prepared to go along with it. That shows what can be done if people are of good will. 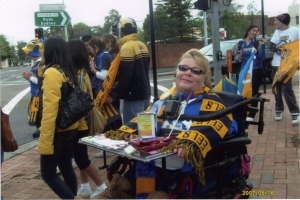 Leave a Reply to the island traveler Cancel reply