Picking up rubbish – I guess Americans would call it trash. During my past few morning walks I had noticed that someone had dumped some rubbish in the park. I took a picture of it the other day. Today the rubbish was still there.

On my walks I had noticed some other rubbish near a street where probably a box had fallen off a truck. Pieces of foam, large and small, were to be seen along the footpath. Today I looked whether there were still any pieces left lying around. I had one large plastic bag and a rubber glove with me. And sure enough, I was able to fill my plastic bag with the left-over foam pieces to discard them in our rubbish bin at home. On the way I also happened to see a couple of discarded glass bottles which I took along too to dispose of them in our recycling bin. 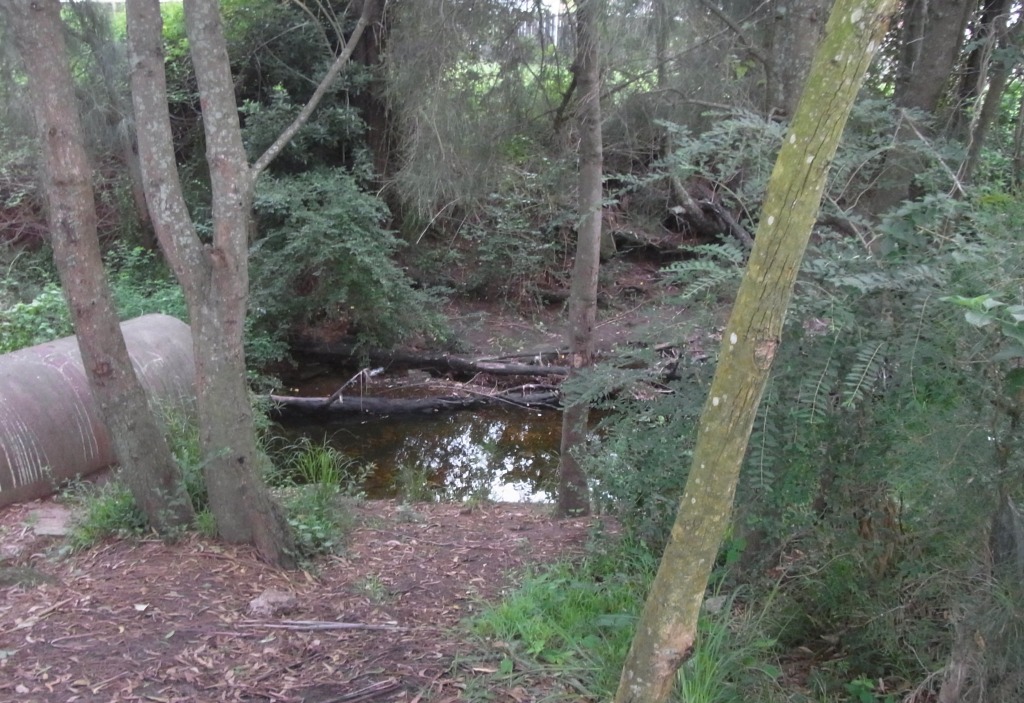 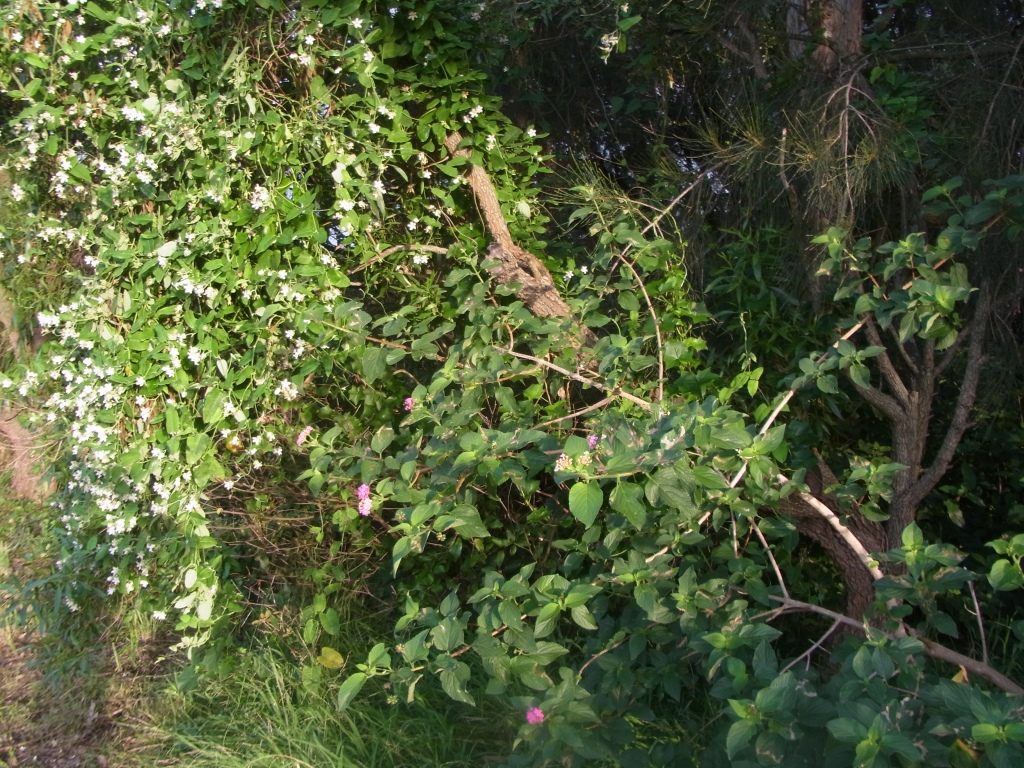 There are still some puddles left from the rain.

There are a lot of forest fires in California at present. This is surprising for it is winter there, isn’t it? I just heard on the news that California has at present a very serious water shortage. Some farmers are already in danger of going out of business. We here in Australia live on the driest continent. We know about the desirability of having adequate amounts of water. These dry spells can be horrific. Let’s hope that California is going to get some good rainfalls soon and also that some neighbouring states can help out with some water where needed.

The rain has stopped. This morning I had another beautiful walk along Cambridge Road. I took the same walk yesterday morning too and also the day before that! That means I’ve been walking the same route for three days in a row.

Yesterday I did not take my camera along. But today I did. I’ve been taking pics on these morning walks so often! However, I always spy something else I want to capture. I hope I don’t make it too boring for you to show you some more of the pics I took.

The WordPress.com stats helper monkeys prepared a 2011 annual report for this blog.

A San Francisco cable car holds 60 people. This blog was viewed about 1,700 times in 2011. If it were a cable car, it would take about 28 trips to carry that many people.

The WordPress.com stats helper monkeys prepared a 2012 annual report for this blog.

The WordPress.com stats helper monkeys prepared a 2013 annual report for this blog.

A New York City subway train holds 1,200 people. This blog was viewed about 6,900 times in 2013. If it were a NYC subway train, it would take about 6 trips to carry that many people.

This morning I ventured out into the rain for a leisurely walk to take some pictures. It was just a drizzle and absolutely calm. I was able to walk with an umbrella without having to fear that some nasty wind would rip it apart. The bush smelled lovely after being slowly soaked with beautiful warm rain. Yes, it’s still in the low twenties, Celsius I mean. For me this is still a very pleasantly wet summer day.

And then I walked back via Lakelands Park.

I just discovered this report on the ABC’s news page. Hopefully we won’t have any extremely high temperatures for a while.

. . . . .  Today is forecast to be the first day in a week where some part of Victoria will not reach 40 degrees Celsius and the Bureau of Meteorology predicts the mercury will not get up to 40 again for at least the next seven days.

However, Commissioner Lapsley says that does not mean Victoria has seen the end of dangerous fire conditions this summer.

“This is the start or the changing point in this summer,” he said.

“We don’t see any rain, we don’t see the break in the weather and we certainly see warm conditions for the month of February.”

Fire crews in New South Wales are battling a number of fires, including a big blaze in the Riverina in the state’s south.

It has burnt more than 2,500 hectares and overnight residents in Carabost were evacuated when erratic winds pushed the fire towards about 30 homes and at least one home was lost.

Fire burns around Minjary in NSW
PHOTO: A bushfire burns around the NSW town of Minjary, near Wagga Wagga. (Facebook: NSW RFS)
The Rural Fire Service (RFS) spokesman Joel Kursawe says there are a number of reports of properties being damaged in the fire.

“We do have unconfirmed reports of a number of properties that have been damaged or destroyed right across the fire grounds. It is too early to tell,” he said.

Lightning strikes overnight have ignited around 50 new fires in the Riverina and in the central west at Orange and Bathurst.

RFS deputy commissioner Rob Rogers says he is alarmed by the number of fires which are breaking out.

“Obviously we’re concerned about new fires again that would have come from lightning. The number of fires that we’re trying to deal with is just going up alarmingly,” he said.

IT IS REALLY AMAZING HOW QUICKLY A LOT OF BUSHFIRES CAN DEVELOP BECAUSE OF LIGHTNING.

WE KEEP OUR FINGERS CROSSED THAT MOST OF THE NEW FIRES CAN BE BROUGHT UNDER CONTROL BEFORE THEY REACH BUILT UP AREAS.

I think just about every Australian would have heard by now about all the bushfires that are raging at present.

If you are  outside of Australia you may perhaps  be interested to find out how we are faring with the bushfires at this time of the year.

I am sure a lot of information can be found in the above ABC’s write up.

This morning I heard on the ABC radio news that a lot of aircraft is at present surveying new outbreaks of bushfires within the southwest of New South Wales.

The ABC’s Transcript about Bushfires:

The scorching heat has put a strain on electricity supplies and stretched ambulance services.

Strong winds and temperatures over 40 degrees are forecast across the state and South Australia has also issued a severe bushfire warning for tomorrow.

LISA WHITEHEAD, REPORTER: Retired kindergarten teacher Kate Porter is used to living with the threat of bushfires. For 49 years she’s lived on this bush block on Melbourne’s northern fringes.

Kate, do you brace yourself every year for bushfires?

KATE PORTER: Oh, you have to. You never know what’s going to happen. You just have to be prepared.

LISA WHITEHEAD: Her two-acre block backs on to state forest in one of the highest bushfire risk areas in Victoria. Two days ago, a grass fire took off in nearby kangaroo ground and was burning out of control.

The phone tree in Kate Porter’s street swung into action. Two of her neighbours who were monitoring the blaze rang and advised her to leave.

A thousand fires ignited across Victoria in the past three days as the state baked in over 40-degree heat. In SA it was a similar scenario, with 350 fires breaking out across the state and there could be worse to come.

GREG NETTLETON, COUNTRY FIRE SERVICE CHIEF OFFICER, SA: We’re confident that we’ve got sufficient resources to deal with the current situation, however, that could change quite rapidly tomorrow, particularly when the hotter weather and the winds come through.

LISA WHITEHEAD: 39 fires are still ablaze in Victoria today with most concern focusing on the Grampians in the state’s north-west.

CRAIG LAPSLEY, FIRE SERVICES COMMISSIONER, VICTORIA: It’s a fire in very steep bush country. It requires aircraft, significant aircraft, and not many firefighters can get into the exact area of the fire, so it’s difficult in that sense. So it’s causing us concern and will continue to do so through the night and into tomorrow.

LISA WHITEHEAD: Severe fire warnings have been issued for tomorrow as strong winds and searing 43-degree temperatures are predicted in parts of Victoria.

Is tomorrow the worst conditions we’ve seen since Black Saturday?

CRAIG LAPSLEY: It’d be up there, without a doubt. It’s not the same conditions as Black Saturday. It’s not a code red day. Across the state, it’ll be severe and extreme fire danger ratings. It’s got potential.

The intense heat in Melbourne has played havoc at the Australian Open. When the temperature topped 42.1 this afternoon, the tournament’s heat policy was finally activated. Roofs were closed and play was suspended on outside courts.

A Climate Council report released today says the number of hot days across Australia has more than doubled and that climate change is making heatwaves more frequent and severe.

CRAIG LAPSLEY: In emergency management, I think we’ve known for some time that there is a whole heap of challenges. Some will argue whether climate change is a reality. I think it’s quite clear. We’ve got challenges in climate, we’ve got land use that’s different, we’ve got different farming scenarios, we’ve got people that have taken tree change or sea change. It’s a whole heap of things.

LISA WHITEHEAD: With no relief from the extreme temperatures in sight until Saturday, the elderly, the sick and the young are being urged to continue to stay indoors, stay cool and drink plenty of fluids. But some householders have struggled to cope after experiencing blackouts as the heatwave and increased peak demand impacts on electricity supply.

NELUM SOYSA: It’s like an oven, it’s like a furnace. We couldn’t open the door because it was just so hot outside.

LISA WHITEHEAD: The local GP says she was concerned for her elderly neighbours.

NELUM SOYSA: Elderly people get dehydrated. They can get confused. They get irrational. They can get tachycardia and then they get heat distress and that’s very difficult because they sometimes can’t ask for help or don’t know to ask for help.

LISA WHITEHEAD: Ambulance Victoria is warning people to prepare for yet another sweltering night with the overnight temperature in Melbourne not expected to drop below 29 degrees.

PAUL HOLMAN, AMBULANCE VICTORIA: What happens overnight unfortunately is the body doesn’t get enough time to recover. So we’ve had one night, then two, then three and now four and that’s – so people that are already ill or the elderly, they’ve now got a cumulative effect and their body’s not getting enough time to cool down.

LISA WHITEHEAD: Kate Porter isn’t taking any risks with her health or the weather conditions. A Baptist church agency that regularly checks on her welfare found her a place in respite care.

KATE PORTER: If you’re not able to defend your own home, that you should actually leave. I don’t think it’s wise to stay, because you don’t know how fierce the fire’s going to be. Every since I’ve lived there, I think every year, “Well, if it goes, it goes,” and I go.

I hope a lot of people are going to read this.

I’ve been following the news ever since Edward Snowden, former NSA contractor, dropped NSA Leaks, as they call it now, on our collective consciousness.  There followed the back and forth salvos between the civil rights and privacy advocates and the equally indignant US Intelligence community who staunchly wave their patriotic flag to every Jane and Joe.

If there is one thing that has planted an unsightly scarlet letter on the Obama Administration, it’s this whole affair.  Yes, we know it started even before this administration. Yes, it was in response to a horrific event in September 2001.  A lot of things have happened since then, all in the name of national security, protecting the American public, its land and its waters, and therefore, this is all in the efforts to preserve the freedom of every American. The so-called, “American way of life.”  Well, we have been made privy to…

These Fennel plants are spreading a real lot in some parts of the bush along Brooks Creek.

I took these pictures of Brooks Creek on one of my early morning walks.