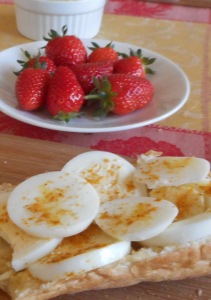 On Monday I had a hard boiled egg with curry on a piece of bread. I also had some of the home grown strawberries. Today I took some pictures of that little patch where the strawberries grow.

I just had a look at the post from Peter’s birthday:

This was the day when we had in Wollongong this lovely cheese board.

This is what I said towards the end of the post: