Bob Hawke was the environmental prime minister of Australia. His legacy includes Landcare and the listing of the Queensland’s Daintree wet tropics, Shark Bay in Western Australia, Uluru-Kata Tjuta in the Northern Territory, the Gondwana rainforests of the New South Wales-Queensland border region and large extensions to both the Northern Territory’s Kakadu and the Tasmanian wilderness world heritage areas.

The latter was in contention in 1989 after the “Whispering Bulldozer”, the Tasmanian Liberal premier Robin Gray, lost office to Labor’s Michael Field and myself, leading the five Greens holding the balance of power. We Greens negotiated the expansion of the Tasmanian wilderness world heritage area by more than 600,000 hectares to include such iconic wilderness as the Walls of Jerusalem, Central Plateau, Denison River Valley. At the end, Field had had enough and called a press conference to announce the outcome. I did not go.

Instead, I was on the phone to Hawke’s office arguing that the eastern end of Macquarie Harbour – some 40,000 hectares – should also be included. Hawke agreed so that most magnificent part of the harbour, including Kellys Basin, the mouth of the Gordon River and the convict ruins on Sarah Island, is, these days, a natural delight free of otherwise inevitable industrial fish farming, for hundreds of thousands of people catching cruises out of Strahan.

After taking over leadership of the Labor party before the election in 1983, Hawke committed to saving the Franklin River. The Wilderness Society’s peaceful blockade of Gray’s dam works threatening the river had seen thousands of people come to Strahan and more than 500 go to Risdon jail. In Melbourne, at a rally of 15,000 people, Hazel Hawke famously put on “No Dams” earrings and Bob made an ironclad commitment to stop the dam. On election night, 5 March, he made just one specific commitment: the dam would not go ahead but those affected would be duly compensated. He carried through on both promises.

One US outdoors company recently put the Franklin at the top of the world’s 10 most desirable whitewater rafting adventures. Had Hawke and Labor not won that election the river would now, instead, be a series of dead impoundments.

Hawke’s next masterstroke for the environment was to replace Barry Cohen, his first minister for the environment, with Graham Richardson. Never before or since has such a powerful figure on Australia’s political landscape held this portfolio. There could not be a greater contrast with the present minister, who has been absent from the 2019 election campaign.

Richardson told environmentalists that if he was going to take action he needed to “hear the crowd roar”. So the late 1980s and early 1990s were perhaps the greatest period of public involvement and environmental advance in Australia. This was not without contention. Richardson faced a jeering anti-environmental mob at Ravenshoe in northern Queensland on the way to the Hawke government having the rainforests given world heritage status and protection.

In Tasmania, Richardson, working with Hawke’s office, made repeated visits to back that 1989 extension of the Tasmania wilderness world heritage area against mounting opposition from loggers and miners and the state government. They stopped the polluting Wesley Vale pulp mill project after a huge campaign led by a farmers’ daughter, Christine Milne.

Of course, Hawke did not please us all the time. He backed uranium mining and flirted with Ronald Reagan’s proposal to test MX missiles over the Pacific Ocean. He backed off on a treaty with Australia’s First Nations when the proposal came under fire from the Western Australia Labor premier Brian Burke. 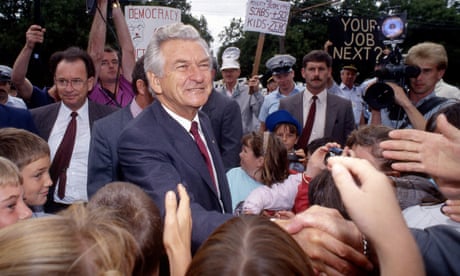 Bob Hawke, the typical Australian who enjoyed extraordinary popularity as a public figure

A Hawke masterstroke was to accept the proposal of the Australian Conservation Foundation’s Phillip Toyne and the National Farmers’ Federation’s Rick Farley to set up Landcare. This became a beacon of global interest in government-funded repair of rural lands and rivers. That Landcare and general environment spending has been gutted in recent years highlights the loss of vision in Canberra since the great environmental innovation era Hawke ushered in.

Key to Hawke’s environmental success was his listening ear. He knew the Australian public was keen on protecting nature and he made himself open to direct liaison with environmental leaders. He was a tough negotiator but he and his staff opened an ear to the environment, which has been finally closed altogether by the Morrison government.

Richardson was the first environment minister to alert cabinet to the onrush of climate change. Decades later, at the 25th anniversary of the saving of the Franklin in Hobart in 2008, Hawke lambasted the Coalition’s lack of concern for the heating planet:

And as you look at the arguments and the positions of political parties today you see a complete replication of what we experienced back there in 1983. The conservatives: they never change, they never learn. What was their argument back then? You can’t do this, it will cost jobs. It will cost economic growth. You can’t do it, you mustn’t do it.

Hawke did it and, were he prime minster in 2019, I reckon the very unpopular Adani coalmine proposal would be headed for the bin.

With Paul Keating in the fray, Hawke joined the French government in leading the world – against Bush administration misgivings – to formulating the Madrid protocol which protects Antarctica from mining industrialisation.

Perhaps Thursday night’s Southern Aurora, visible across southern Tasmania, was nature’s accolade for the life of a natural champion.