“Global warming cannot be dismissed as just another environmental problem.”

This video of Bob Hawke speaking about climate change with his granddaughter was played at his memorial today, 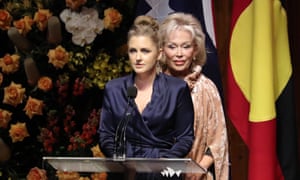 And this is what Sophie Taylor-Price had to say:

“I grew up in the shadow of a giant. All the reflections shared today reinforce that his greatness was one of a kind. However, his blood is my blood and his story has become part of my story. When I was four years old, I sat by my grandfather’s knee in 1989 when he addressed the nation on climate change. It is actually one of my first memories. Having spent my entire professional career working in climate change and sustainability, you could say that that night rubbed off on me.

However, it is only in recent years, with the passing of my nan and pop, that I’ve truly reflected on just how their values have shaped mine and what I carry forward.

Of all the things said about Bob these past weeks, there is one story that, to me, speaks to the legacy that is most relevant to the future of Australia. For both what was achieved and what is possible, in 1989, Bob was handed some cabinet papers, requesting Australia’s support to open Antarctica to mining. He was horrified. But he was told that years of international negotiations could not be unwound. It was a done deal. “Bugger that” he said.

Refusing to sign, Bob courted the world with an ideal for something greater, better and fairer. Enlisting global eco champion Jacques Cousteau, the Hawke/Keating government determined to set about changing the world’s mind, and they did.

In 1991 the Madrid protocol was executed, making the last great wilderness on earth a place devoted to peace and to science, protected from exploitation. Now, that is legacy.

To me, this tells the greatest of stories. It speaks of pop’s values of fairness and equality, and his love and his faith in the brotherhood of mankind. It speaks of true leadership and his willingness to be unpopular and to listen to unpopular truths. Thirty years ago I sat by his knee and he implored us to take action on climate.

These past months, he expressed such great sadness that we have failed to do so. He saw it as a collective failure of our nation that we have traded short-term interests over intergenerational equality.

He would say that the foundations of excuses we cling to are fragile and will inevitably collapse. We must stop delaying the cost of change now, for all we do is load our future citizens with a debt that they cannot repay. Let us listen to the children and young people who parade their courage and conviction, because their tomorrows will be affected by our actions today.

Many tributes have been shared today, but truly honouring my grandfather means reflecting on his achievements and applying his values to the future choices we make.

Let us take to heart his courage, borrow his optimism and mirror his love for the brotherhood of human kind.

In his twilight years, pop was a gruff old bugger at times. I imagine that if he were here today, he would look at me with love and with fierce pride and with a twinkle in his eye, say in his grumpy old man voice, ‘Well, get on with it then.’

So, that is my path. It was both his gift to me and my enduring tribute to his legacy.”

Bob Hawke’s granddaughter has delivered a searing critique of Australia’s progress on tackling climate change while praising the former prime minister for his visionary work.

The former Labor leader’s many achievements were highlighted at a state memorial service in Sydney on Friday where granddaughter Sophie Taylor-Price argued his most relevant legacy was protecting the environment in the face of resistance.

Ms Taylor-Price said one of her earliest memories was when, as a four-year-old, she sat by her grandfather’s knee in 1989 as he addressed the nation on climate change.

“Having spent my entire professional career working in climate change and sustainability, you could say that that night rubbed off on me,” she told the Sydney Opera House audience.

That year, Mr Hawke was handed cabinet papers requesting support for opening up Antarctica to mining.

“He was horrified,” Ms Taylor-Price said on Friday.

“Bob courted the world with an ideal for something greater, better and fairer.”

Instead of signing off on the plan, the then prime minister set about changing the world’s mind, and in 1991 the Madrid protocol was executed and Antarctica was protected.

“Now, that is legacy,” his granddaughter said.

In contrast, current Australian leaders have failed to take action on climate change and Mr Hawke expressed disappointment regarding that fact before his death.

“He saw it as a collective failure of our nation that we have traded short-term interests over intergenerational equality,” Ms Taylor-Price said.

“He would say that the foundations of excuses we cling to are fragile and will inevitably collapse.”

To truly honour Mr Hawke would mean applying his values to “future choices”, she said.