And he says: “Our son Martin had even flown in from Melbourne for the weekend. He had to fly back on Sunday and we offered to take him back to the airport and take daughter Caroline home to Sydney.

The only way out from Wollongong, which is practically just a few meters above sea level, is up a steep road, Mount Ousley Road, across the Illawarra escarpment. It was only constructed during WWII by the Americans with their “can-do”  attitude.

While going up the steep hill, Caroline was driving,  the car seemed a bit sluggish. With four adult people on board, it did not seem unusual. But, we started to discuss the car’s age and Caroline suggested we could buy another car. Maybe not a new one, but at least a well preserved and reliable second-hand car.

Just seconds after discussing this, and not remembering Ilse’s advice,  the car showed severe signs of illness. It lost power and no amount of gear-shifting would help. Soon enough, belching smoke poured out everywhere and we feared the engine could blow up. Our car looked more like an old steam engine than a 21st Century automobile.  We decided to pull up at the turn-off to the Clive Bissell Drive where there is a convenient parking area. We thought of letting the car cool off and then continue.

Caroline did not trust “Pauly” anymore and rang a friend who lives in a neighbouring suburb. He came  and Martin made it, just in time, to the airport.”

In my Diary from 19th May 2015 I found the following pictures: 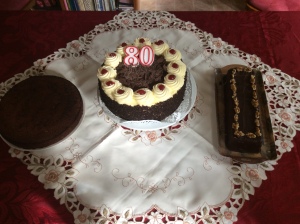 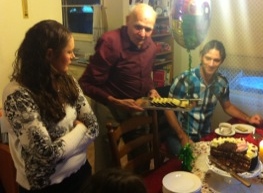 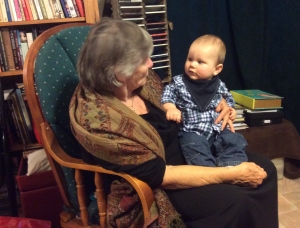 Everyone could order what they felt like. For entrees there was Rollmops, or baked Camembert cheese or soup.
Most people got German beer from the tap. Ebony left soon after dinner with the two little darlings, our great-grandsons. There were later on 12 people left for the welcome drink, a nice sweet bubbly.