These are just some of the signs at the entrance to the pool.

A balmy morning during an Australian summer. I hadn’t been to  Dapto pool for quite some time. I thought today was the day. I remembered the school swimming carnival must have been on last week. I could then definitely hear voices from the announcements on the loudspeakers, which would mean the school swimming carnival was on. I knew from experience when this was on at the beginning of each year there was no chance at all to do any swimming in one of the lanes. All the lanes would be preserved for school children. So far so good. The school carnival was over, or was it? I was to find out soon enough.

I had planned to walk the short distance to the pool. However I did get delayed. Couldn’t find my swimmers. Took me ages to find them. Had absolutely no idea where on earth they ended up after my last swim  a long, long time ago. Anyhow when I finally was dressed in my swimmers ready to walk to the pool, the sun had been out for a while already. The temperature was approaching 27 C (80 F). Peter suggested he was to drive me to the pool, pointing out it was already a bit too hot for me to be walking all the way.

Gee, I was very relieved Peter had offered to drive me. When we arrived at the swimming center the parking lot was packed full. So many cars  on a weekday morning! This could only mean there was another swimming competition on. I took my camera out of the car and went to check. The swimming competition seemed to be well on its way. I took a few pictures and then when straight away back home with Peter who had been waiting for me.

I passed the outside wall of the building on the way to the entrance and noticed some beautiful paintings on the wall which I had not seen before. (This showed to me for how long I had not been this way!) So I took the opportunity to shoot some pictures. 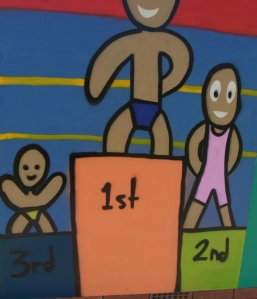 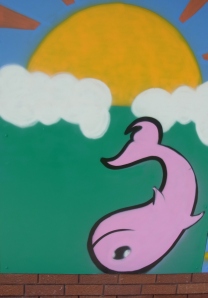 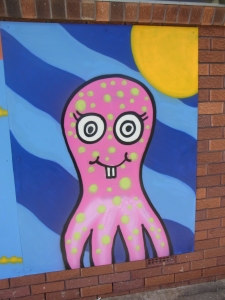 The kiosk near the entrance was in business already.

A quick glance at the large pool and I was gone. 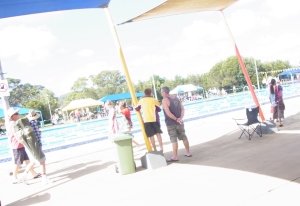 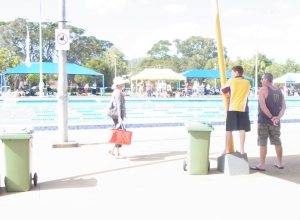 10 thoughts on “Swimming is good Exercise, but not today”