I had taken the painkilling tablets the doctor had prescribed for me. I was supposed to take three times two tablets per day, however not more than six a day with intervals of at of at least six hours. For three days I took the six tablets per day. On Friday I already felt much better. I walked a lot in the sun. The right hand didn’t feel as painful any more. There was still some feeling of pins and needles, but I was able to do a lot more house-work than during the past few weeks. Friday afternoon Irene and Marion came to my place. We played a game of scrabble as we always do when we meet on a Friday afternoon. Then we had our coffee break. And after coffee and cake it was time for some games of Rummy. Irene said she’d have to leave early for her son was to come to have dinner with them. She went home just before five. We had had three hours of togetherness. For me three hours was plenty. I honestly felt very, very tired and was glad when Marion decided to go home too. Maybe she would have liked to stay a bit longer. I don’t know. However I did not hold back and proclaimed that I felt dead tired and desperately needed a bit of a rest. I did lie down on the sofa in the living-room.

Peter had been doing his things all afternoon but he agreed that he would cook dinner.  He cooked some lovely cauliflower with breadcrumbs in plenty of butter. I needed only a short rest. Soon I got up again to have dinner with Peter. I felt very grateful that Peter had undertaken kitchen duties.  This bit of a rest was so good for me.  Before Peter started cooking he took my blood pressure. It was extremely low, however the pulse rate was very high. Peter gave me a glass of water. When he took my blood pressure again after about half an hour, the pulse rate had normalised and the blood pressure seemed pretty normal overall. It’s amazing what a difference a bit of rest can make!

On Saturday morning I got up very early because I had gone to sleep early the night before. My right arm and hand felt like it was improving a lot. I took a shower and continuously did exercises with arms and hands. Since I felt so much better and it promised to be a calm sunny morning, I had the idea to be walking to the pool. I very much longed for the solar heated water of the pool.   Just the perfect morning to stretch out in the water for a few minute, I thought.

I had breakfast with Peter. I planned to arrive at the pool towards ten o’clock. There was some time to do a few things around the house and in the kitchen. Ten thirty am is the time when we like to watch the German News Program from Berlin. At the same time we usually have a cup of morning tea. When I told Peter I would be walking to the pool he reminded me I would not be able to watch the German News then. My response was that if he picked me up from the pool by twenty minutes past ten we could both be sitting in front of the TV by half past ten. Peter agreed that he would pick me up at the set time.

So I walked to the pool. It was a very pleasant walk. I did not have to walk too fast. Very cheerfully I arrived at the pool and talked to some attendants at the entrance. I soon noticed there was a class of women in the deep end of the pool. The instructress stood at the edge of the pool and gave instructions to some lively music. I was happy to stay at the shallow end of the pool. I had the whole area to myself. The water was flooded with beautiful sunshine. Doing my movements I felt very invigorated. I loved to have this bit of music from the top end. It helped me with moving about rather enthusiastically. I thanked God for such a wonderful morning.

After a few minutes all the women from the class did get out of the pool and assembled in the shower room. I soon followed. I was ready on time for Peter to pick me up. A bit after eleven we got ready to go to Dapto Shopping Centre. It took us nearly an hour to finish our shopping there. We bought some very good food and felt very happy with our purchases. However on our list were a lot more things to buy at another place. This would have taken us another hour. We decided to buy the other things on the following day, which was a Sunday. We wanted to go home and get lunch ready.

Saturday night I did fall asleep in front of the TV. When I woke up I noticed the TV had been turned off and Peter was in the other room talking to his sister Ilse on Skype. Ilse lives in Berlin where they have a great heat wave at the moment.  I could hear every word Peter was saying and also every word Ilse was saying. After a while Peter came looking whether I was awake. He suggested I come over and talk to Ilse for a bit too. I love having a conversation with Ilse. I went to talk to her. There is always something to  talk about with Ilse. This talk with Ilse cheered me up a lot.

Sunday morning I was up early again, early enough to walk to the early Mass at the Catholic Church in Dapto.  Our Vietnamese priest is still on vacation, however the old priest who is taking his place for the time being, is a  dear old man with a wonderful singing voice. Gee, I love the way he sings his hymns so enthusiastically! On my walk to the church I had touched my ZEN stone a lot. The fingers of my right hand had not been able to make a fist for over a month. However the painkilling tablets and exercising the fingers with this stone and sometimes also with some Chinese Iron Balls made my hand much better now. It was so comforting to say some prayers during mass. I  came to realise once more how important my Catholic faith really is to me.

As I said we had to do a lot more shopping on Sunday. We also bought some lovely flowers. For afternoon tea we used our red teacups. We took pictures of our afternoon tea with the newly bought flowers on the table as well. 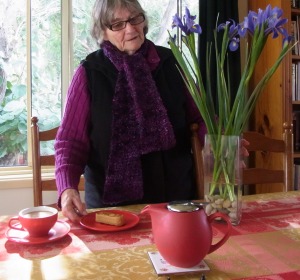 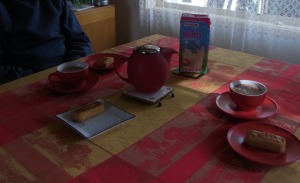 Today, Monday, we had another beautiful sunny day. Peter and I drove to the lake and took quite a few pictures there. I am going to show these in another post.

Since Saturday I have reduced the intake of these painkilling tablets by half. Tomorrow at ten o’clock I have to be at Southern Neurology in Wollongong. 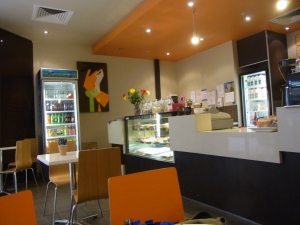 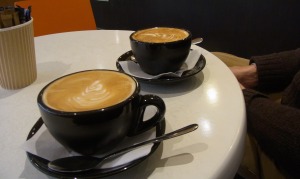 The following day we went to Sydney to see my Prothetist at an Orthoplant Dental Laboratory who took on the immensely difficult task of making for me some new dentures. At the moment I was provided with some temporary dentures. Once I get used to them, he can create the real dentures.

After the appointment with the Prothetist (it was already my third visit to him!) Peter and I felt like going for a special treat. We chose the Lind cafe at Martin Place. 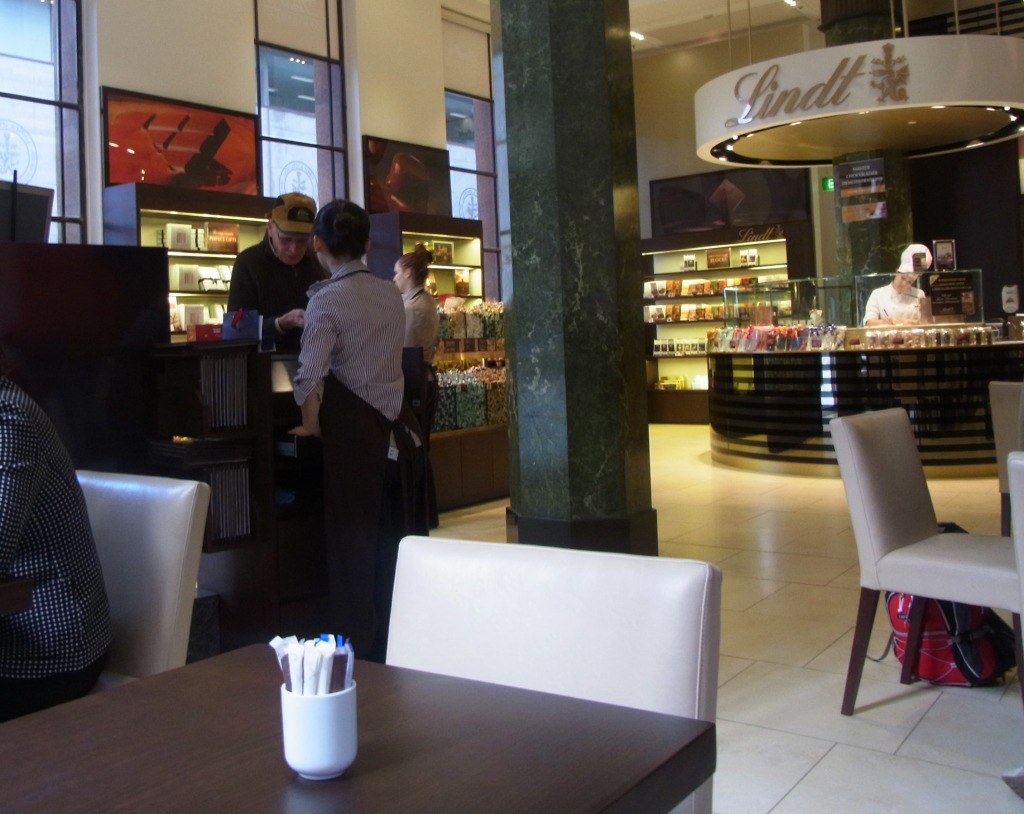 Later on we went to Hyde Park where Peter was feeding the birds with some of his muffin. 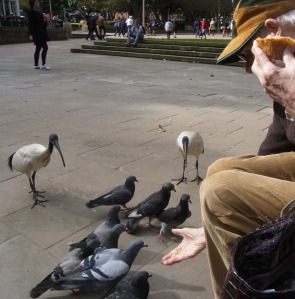 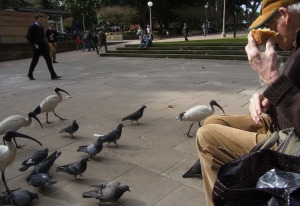 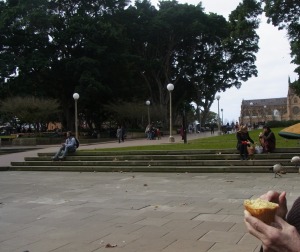 After our train-trip to Sydney yesterday (Wednesday) I had to go back to Dapto Medical Centre early this morning to find out about the test results. It was established there is no thrombosis, the blood test was normal too. But because I suffer from pain in my right arm, wrist and pins and needles in my right hand, some other test revealed that it has to do with a nerve strung. I did get now an appointment for next week at Southern Neurology in Wollongong. The doctors reckons all this has to do with old age. Ah, the blood test showed that I have Osteo Arthritis.

Today, Thursday, I went with Peter to Wollongong for Peter had to pick up there one of his hearing aids which had been repaired. Then we had time to go again to this beautiful cafe where we had been with Sylvia the previous Saturday. On the way we saw a few little toys. We thought it would be nice to have these toys for our three great grandchildren. So we bought the three toys.

With our little bag of gifts we entered the cafe. Surprise, surprise, we met there Monika, our daughter with Krystal, who is sixteen and Monika’s youngest daughter. It was such a beautiful surprise to see them there! 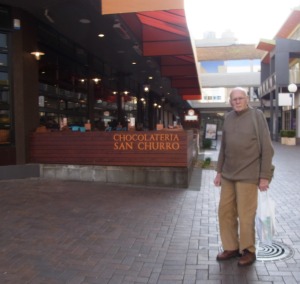 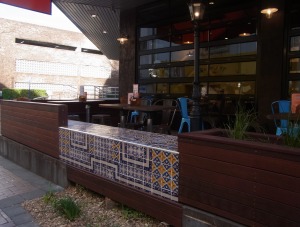 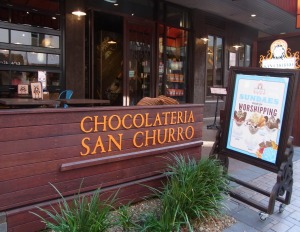 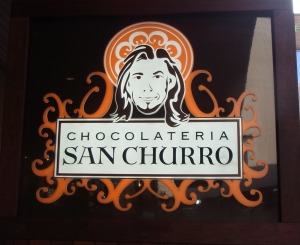 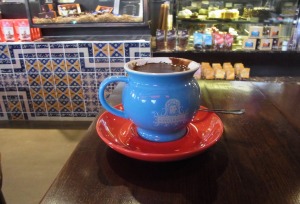 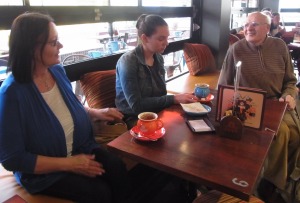 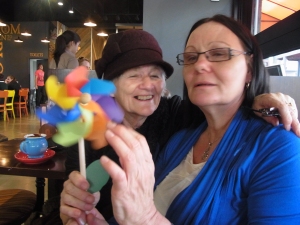 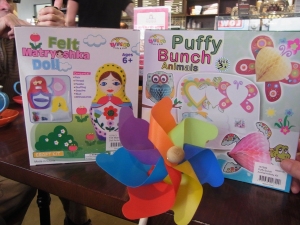 Going back to where we had our car parked, we took some pictures of MacCabe Park. 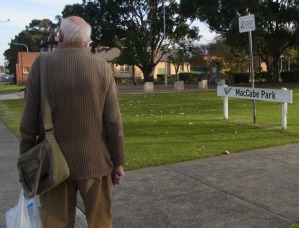 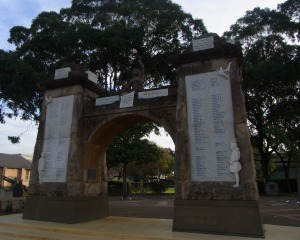 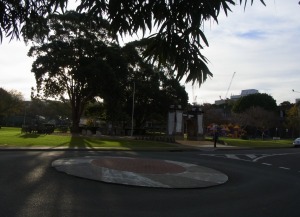